DENVER -- According to co-founder and CEO Ryan Sullivan, the genesis of ParkiFi is “the most generic idea story ever.”

He and his friend, co-founder Rishi Malik, were running a little late for a meeting and Sullivan was getting annoyed looking for a parking spot -- the lack of which was making them even later. He voiced his frustration, and Malik agreed something had to be done.

Right after work that day, they “started looking into it with the idea of creating an app to find a parking space.

“We discovered there were about a dozen already out there.” So the next thing they did was wonder “Why are we not already using them?  Why don’t we see them everywhere?”

The answer -- and what they did when they found it -- is where this story goes from being a could-have-been or a daydream to being a one-and-a-half-year-old graduate of the Boomtown start-up accelerator with sales in the pipeline, employees on the payroll, and financial backing of $2 million announced in May. (That first round includes the Colorado-based investors Galvanize Ventures, Foundry Group Angels, and Access Ventures, as well as several others.)

“The answer was a lack of data,” says Sullivan. “When and whether a parking spot is full or empty is not data that is gathered by anyone. We decided we needed to create a platform, a device that would provide the missing data. Then all the mobile apps already out there could access it.”

That’s a much bigger job than creating an app. But since they’d met about a year and a half prior going through TechStars and then working on multiple projects together there, they’d “realized we both had the entrepreneurial itch – then came the parking conversation.”

From there, they started researching and tinkering and – Sullivan’s suggestion that their evolution from idea to company is somewhat generic has some merit here – readers can imagine the nights and weekends of work while fast-forwarding to the present.

Perhaps surprisingly, ParkiFi’s customer is not the frustrated driver – it’s the owner of the parking spaces, and their first client is a large parking management company in Denver that Sullivan describes as “one of the largest regional parking operators in Denver” but whose name he declined to reveal.

In any case, Sullivan was able to reveal that installation of ParkiFi sensors in their over 1,000 parking spaces has begun and the unveiling to the public is scheduled for the near future. They are scheduled to begin work on a job for the City of Boulder this month, and start dates are being set for parking lots in California, Florida, Pennsylvania and Washington, D.C.

By the end of 2015, Sullivan expects to have projects in “seven U.S. cities and possibly one foreign country.”

An initial survey of the parking facility by ParkiFi staff provides the data that makes all the difference: “the type of situation and whether every spot should be tagged, or if there are some that are rarely used and it’s not worth tagging them.” (By “tagging,” Sullivan means installing one of ParkiFi’s sensors, which are -- depending on the decision of the client -- either adhered directly to the pavement or buried just below it. In Denver, they opted to bury them in order to insure their ability to plow the lot in the winter without worrying about damaging or dislodging them).

The sensors are installed in the middle of the night -- when the lot is empty -- so they can be calibrated to empty spaces.

The first morning after installation is complete, Sullivan and/or Malik is there to show the parking lot staff the dashboard and how it works. “The system shows them all the things that effect occupancy in their lot: weather, local events, time of day, day of the week, etc.,” said Sullivan. “And it allows them to incentivize with lower pricing when they know there is usually less parking, early bird or weekend discounts, etc.”

The next obvious question is: Why hasn’t anyone done this already?

Sullivan’s answer: “No one has been able to do it cost effectively before. Our approach is a tenth of the cost of other companies’.”

One aspect of their ability to cut costs is installation. Sullivan says it takes about two minutes per sensor on the surface, and that burying adds only about another three minutes, allowing them to complete a 1,000-space parking lot in about 83 hours, or approximately two weeks of eight-hour days.

And, the sensors are not only made in the USA, they’re made in Colorado.

“It was important to both of us that (our product) be made in Colorado,” said Sullivan about their search for the right manufacturer. When they found Premier Manufacturing in Frederick (which bills itself as “one of the largest electronics manufacturing service providers in Colorado”) and met with owner Edmond Johnson, they knew their search was done.

“They were also concerned with keeping jobs in Colorado,” said Sullivan. “We saw eye-to-eye from the start.”

Johnson confirms that. “We are ecstatic about working with young millennials like Ryan and Rishi, who are not only great thinkers about technology – and not at all bureaucratic – but are very entrepreneurial,  just like Premier,” he said. 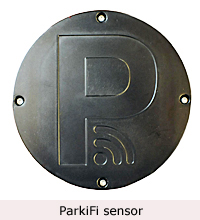 Johnson said he met ParkiFi’s founders through the Boulder-based mechanical, electrical, and software design firm Boulder Engineering Studio, with which Premier works periodically, and became immediate fans. “We believe in the product and more importantly the two founders, Ryan and Rishi,” said Johnson, about whom he describes as having “a great sense of business and a high level of honesty, integrity, and commitment to partnership.”

Johnson also likes the business idea, noting it meshes with his company’s commitment to the IoT (Intelligence of Things) market while “adding value and cost-savings as well as a level of convenience to consumers.”

Once implemented, Malik and Sullivan’s creation will work with ParkMobile, Passport Parking, and MobileNow! to help parking space hunters ease the frustration that was the inspiration for their invention.

About the Author: Lisa Dicksteen

Lisa Napell Dicksteen has been a writer and editor for over 30 years, and has published on education, relationships, style, technology, theater, food, dance, literature, social action, religion, academic success, continuing education and more. Her work has appeared in The New York Times, For Women FIRST, Newsday, Bride's, and numerous other consumer and trade publications. In addition, she holds a Master’s degree in teaching secondary English. A native New Yorker, she has lived in Boulder since 2007.