FORT COLLINS -- Accelerators and incubators are a growing phenomenon that shows no signs of slowing down as they spread across the globe.

Julie Penner of Boulder-based Techstars said the widely respected startup accelerator-- founded in 2006 by David Cohen, David Brow, Jared Polis and Brad Feld -- has achieved traction around the nation and in Europe in less than 10 years.

Penner said Techstars’ mentor-driven model has proven its effectiveness many times over. “We see accelerators as a really capital-efficient way to support startups.”

And while Techstars is one of the best-known startup accelerators in the U.S., similar accelerators are popping up around the world -- including Sweden and Chile.

Penner, along with Carla Bustamante from Startup Chile and Susanne Comella from Chalmers Innovation in Sweden, weighed the effectiveness of accelerators and their perceived and proven relevance on a panel Thursday during Fort Collins Startup Week. 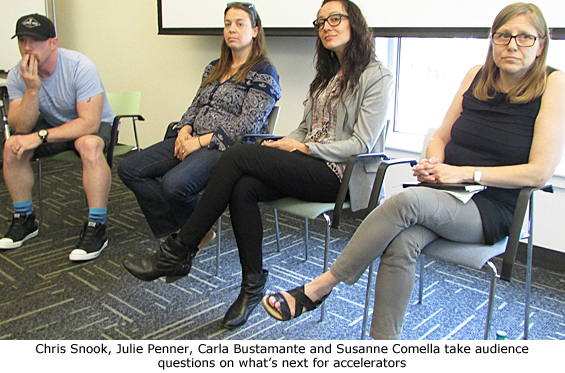 The panel discussion was held in the Innosphere, a startup incubator whose origins go back 15 years. Innosphere is considered one of Colorado's premiere incubators and is part of a statewide incubator/accelerator ecosystem that includes Denver-based Galvanize and Industry, Centennial-based Innovation Pavilion, Boulder-based Boomtown and the recently opened The Warehouse Business Accelerator in Loveland, along with others spread across the state.

Sweden's Chalmers Innovation -- which hit its stride over the last three years -- is now considered one of the top 10 accelerators in the world, Comella said. “Everyone is interested in what we’re doing.”

Bustamante said support for Startup Chile in that nation has been growing since it was established in 2010.

Bustamante said the country is even being called “Chile-con Valley,” a reference to California’s Silicon Valley and its rich startup history that continues to this day.

“The other measure of success is the network that gets created (when client companies graduate),” she said.

Bustamante said Startup Chile has a different take on success. “For Chile, it’s important to create social value as well as economic value.”

Creating new jobs is great, she said, but it also extends to Chilean culture.

“The one big accomplishment of this program is it’s creating change,” she said. “The culture has changed by all of the foreigners (international companies) coming in.”

Chris Snook, co-founder of Fort Collins Startup Week and panel moderator, asked how accelerators and their clients might handle another strong economic downturn.

Penner said she would expect the startup entrepreneur class to shrink but not disappear.

“From our perspective, it’s OK to fail and try something new,” added Sweden’s Comella.

“For me, I believe there’s always going to be people wanting to start a business no matter what the market conditions,” said Bustamante.

For a complete list of Fort Collins Startup Week activities – which are scheduled through Sunday, May 31 -- visit here.