SUPERIOR – On a farm or dairy, the one thing that never stops is animal waste. 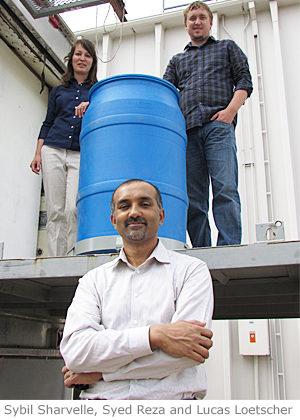 So what can be done with it all?

Some of it can be composted on-site for field fertilizer, but that is an inefficient process which only retains a fraction of nutrients in the finished compost. The rest volatilizes and ends up in lakes and rivers. Not only can this be an environmental problem, but the discharged nutrients reflect a lost economic opportunity.

A new startup company called Nexus BioEnergy hopes to develop an anaerobic digester system that can process the waste to produce energy and recover the nutrients to produce organic fertilizers and soil amendment. Unlike conventional biogas plants that produce an excess of wastewater, the Nexus Bioenergy technology conserves the water by recycling it.

Syed Reza, Nexus BioEnergy president, says he wants to use technology he’s licensed from Colorado State University to do all of the above.

And he believes there is an unmet need by farmers and ranchers that the technology can address.

“Our clients are looking for an ag waste digester that conserves water and is economical to operate,” he said. “What they all want to see is a working commercial model, and we’re looking for partners – some strategic partners – to build that.”

Out on West Laporte Avenue on the CSU Foothills Campus, a working prototype of a waste digester is being prepared to be re-sited this summer to a dairy where its worth can be demonstrated and validated.

Reza said he has a couple of possible sites in mind in agriculture-intensive Northern Colorado.

“We’re looking at Weld County and northeast Colorado as a whole to launch this technology, and there is easily 40 MW of power that can be produced from some of the more intensive ag operators” he said.

“Long-term, the vision for this is an organics recycling plant producing biogas and electricity through co-generation and also produce organic soil amendment.”

Reza said in the long-term the system would also be an asset to a large greenhouse, which would benefit from the biogas and fertilizer.

Reza said such a system could increase a greenhouse’s yield by an estimated 20 to 30 percent.

Reza said the Nexus digester would be especially beneficial to dairies and cattle operations that are required by law to safely get rid of their wastes.

“This is a resource for agriculture,” he said. “It’s really a solution for them.”

Lucas Loetscher, the CSU grad student who began developing the system in 2009, said the pilot unit has shown the system can work and is scalable to large operations.

Loetscher said his digester system uses far less water than others that have been developed.

“There are essentially no systems out there that do this,” he said. “We can very easily extract the nutrients from our feedstock and take them where they need to go.”

“As soon as we started talking about the idea, I got very excited about it,” she said. “It has a lot of potential in dealing with the anaerobic digestion process.

“I’m very optimistic about it.”

Reza said Nexus BioEnergy is now focused on raising money through grants and other means to take the prototype unit to a dairy location this summer and demonstrate its real-world capabilities.

And while the journey to get the digester into commercial operation may take a while, Reza said he’s confident it will ultimately find acceptance in the various targeted sectors – agriculture, food production and greenhouse operations – it is intended to assist.

“We’ve set a window of two years to do scale-up and then move to a commercial launch,” he said. “I think the communities here in all these sectors are very much open to this kind of innovation,” he said.