LONGMONT -- Jalali Hartman brought his robot friends to Longmont Startup Week  on Monday, spotlighting a message of hope for families with children afflicted by autism. 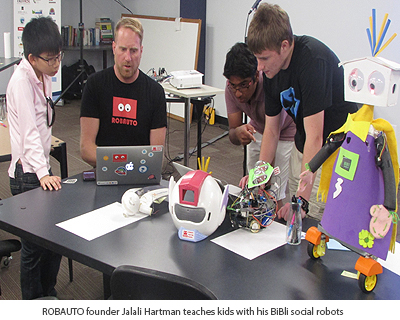 Hartman is the founder of ROBAUTO, a small Longmont-based startup focused on creating “social” robots that are affordable, easy to build and that can help bring out hidden qualities in autistic kids.

“One of the things we’re trying to do is make it accessible to anybody,” said Hartman in his afternoon presentation.

“This represents the next wave in innovation -- being connected to the Internet through these devices.”

Hartman, a serial entrepreneur whose companies have attracted more than $18 million in investment from U.S. and Japanese investors, said insurance companies are interested in finding out if interacting with robots can help ameliorate autism.

“They want to know how people react to robots and can they be used to treat autism,” he said.

Hartman said his BiBli social robots can be programmed so the operator “becomes the robot.”

And that’s been making a big difference in the lives of autistic kids, he said.

“I can’t count the number of people who didn’t speak who would speak to (a robot),” he said. “Now, they have kind of a bridge.”

ROBAUTO’s BiBli robots are helping autistic kids at the Longmont Public Library, a program that was selected in February as a finalist for the National Medal for Museum and Library Service.

“I see this incredible talent that’s really being kind of masked,” he said.

Hartman’s presentation was one of about a dozen on Monday, the first day of the second annual Longmont Startup Week that runs from June 6-11.

Not all of Monday’s sessions were geared toward tech, with several aimed at simply helping new businesses succeed in an increasingly competitive marketplace.

Chris Salter, founder and CEO of Music Wizard, gave a presentation on how to give a powerful five-minute business pitch to potential investors. 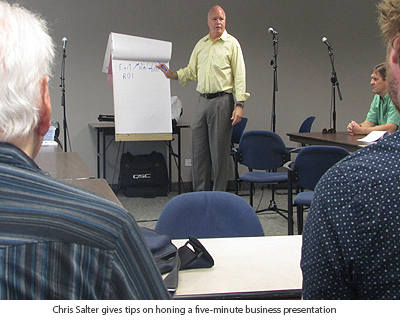 Salter, who has raised more than $10 million from more than 300 investors, said startup entrepreneurs need to realize that investors are “just like normal people” who want their questions answered quickly before they get out their checkbooks.

“Basically, I couldn’t figure out how to do a five-minute presentation without notes,” he said.

Salter said the first thing entrepreneurs must learn when talking to potential investors is to “disqualify” those who aren’t really interested or financially able to invest.

“Only talk to interested investors,” he said. “And how do you find out if they are financially qualified? Just ask them.”

Salter said to also watch out for potential investors who just can’t decide if they’re in or out.

“If they can’t decide, just say I don’t think this is your cup of tea,” he said.

Salter noted that investors generally are looking for the answers to these questions:

Salter said having a working prototype is essential.

“Investors, in general, have zero imagination,” he said. “You need something they can visualize.”

Startup entrepreneurs also had an opportunity to get some insight into the legal aspects of starting a new business during a panel presentation called “Organization, Contracts and Partnership Pitfalls” moderated by Kurt Forrest Brewer, a Longmont-based business attorney. 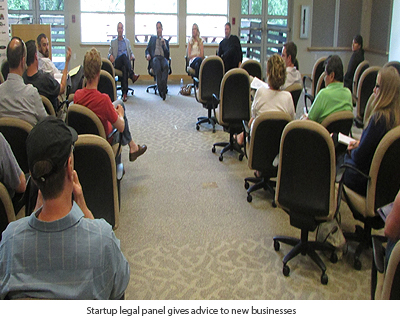 Panelist John Gaddis, a Boulder business attorney, said loose partnerships can sometimes result in a financial bath if the legal aspects have not been attended to.

Gaddis noted a 22-year-old startup founder whose three other co-founders drifted away from the business when it was still unprofitable and then came back for money when it was.

“He said, Do I have to give three-fourths of my equity to my partners? Unfortunately, the answer is yes.”

Panelists noted that anyone who contributes intellectual property to a startup – such as a software developer – should be asked to sign an agreement assigning the rights to the IP they developed while an employee of the startup to the company owner.

Panelists said legal support is important to a startup business, but so is accounting support.

Russ Krajec, a Loveland patent investor who will give his presentation “How Do You Know If Your Patent is Worth Pursuing” today at 2 p.m., said he’s glad to see Longmont join Boulder, Denver, Fort Collins and other Colorado cities in having an annual Startup Week.

“I think it’s a great thing for Longmont,” he said. “I don’t think a lot of people realize what resources are available here.”