We’ve known for years that Colorado has more startups per capita than anywhere else.

It’s a great location to start up a company and maybe you’re wondering if there’s a venture capital infrastructure to support that?

Well, now there’s incontrovertible evidence for Colorado’s leadership position in MicroVCs and it all comes down to … beer. 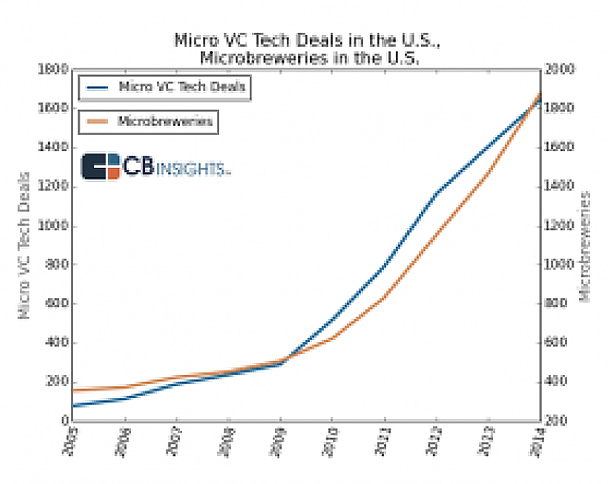 Yes -- a vibrant microVC community is brewing here in Colorado. We’re seeing a huge influx of microVC and nanoVC funds as the state begins to mobilize its local capital to support its burgeoning startup community.

Ok, maybe that’s just a facetious stretch of statistical comparisons -- but there is definitely a rapidly moving trend in micro venture capital and Colorado is feeling the benefits of new sources of capital coming on-line!

This trend mirrors a national trend in increasing micro VC firms. Following the drastic drop in VC firms from over 1,000 to just over 500 after the economic downturn in 2008, microVCs have flourished.

There were fewer than 50 active microVCs in 2011 and today there are over 550 in the U.S. A tenfold increase in just a few short years and many of them are in Colorado.

MicroVC is changing the venture investing landscape and is responding to the needs of startups who need small amounts of capital to prove their product market fit and grow big.

MicroVCs offer a scale that the big firms can’t efficiently provide and they get companies up and going quickly and efficiently.

MicroVCs aren’t just for small companies, though. Check out these results from microVCs who are growing a new crop of Unicorns (private companies with valuations of $1B or greater)  It’s not just the big funds that are hitting the grand slams -- the micros are slamming it home as well.

MicroVCs are creating a huge impact in the startup world, and Colorado is the place to see this transformation taking place on a rapid pace.