FORT COLLINS -- Jacob Meyers, a Colorado State University biomedical sciences student, is aiming to hit back at the mosquitoes that carry  malaria and kill more than half a million people each year. 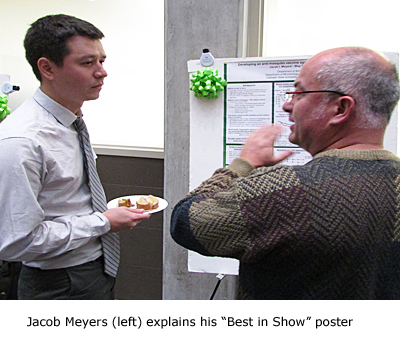 Meyers, winner of the “Best In Show” presenters at the third annual CSU Ventures Symposium on May 1, said his research is focused on developing a “blood meal” insecticide not based on chemicals.

If successful, his research could also be used against other blood-sucking insects that spread disease in people and animals, such as ticks and fleas.

With the World Health Organization calling for new insecticides to fight increasingly-resistant mosquitoes, Meyers says there is a big market for the kind of solution his research might provide.

Three other “Best in Show” presenters made their five-minute pitches before a panel of judges seeking cash prizes during the Symposium hosted by CSU Ventures, the tech transfer arm of the university.

They included a low-cost, paper-based sensor for detecting bacteria, a direct brain-computer interface to help those with physical disabilities, and a program to help make aging a more positive experience.

Another 30-plus students and faculty presented their research on posters in the Scott Engineering Building, explaining to visitors the potential of their research projects.

A highlight of the Symposium was a panel discussion of innovation that featured CSU students, faculty and an intellectual property attorney who assists in taking university research into the commercial marketplace.

Sybil Sharvelle, an assistant professor in civil and environmental engineering, shared her experience of a gray water research project that she’s nurtured from an idea to eventually establishing a pilot project in one of CSU’s dorms.

Sharvelle said the road to the marketplace is often done in small steps.

“You have to start with the fundamental research to show the concept works and then move to a larger scale,” she said. “Start small, prove it small and then move up in very gradual steps.”

Scott Fulbright, a CSU graduate student, related his experience with “Living Ink Technologies,” a company he co-founded that found a market in using algae to print greeting cards.

Fulbright said a marketable idea can come at any time and move forward quickly.

“I thought of the product when I was shopping for a card for my grandma,” he said. “It’s a very simple product, but there’s no one else that’s doing it.”

Ben Walker, Innovation Center of the Rockies program manager and panel moderator, said that notion was proved again recently by former CSU students who took a simple idea of combining all of the ingredients of ‘smores – the chocolate-graham cracker-marshmallow campfire favorite -- into a single gourmet product.

“These are CSU students that worked with Innosphere and now (their product, Stuff ‘n Mallows) is in multiple states,” he said. “You just never know where you can innovate.”

Julie Watson, special counsel with Marshall Gerstein and Borun who works with tech transfer startups, said the impact of university innovation is significant.

“What you create creates industry, it creates jobs, it creates quality-of-life, and everything has a multiplier effect,” she said. “There is a huge impact on the community of what we do.”