LOVELAND -- Ongoing advances in immunotherapies are making great strides treating those in clinical studies stricken with cancer and other life-threatening diseases. 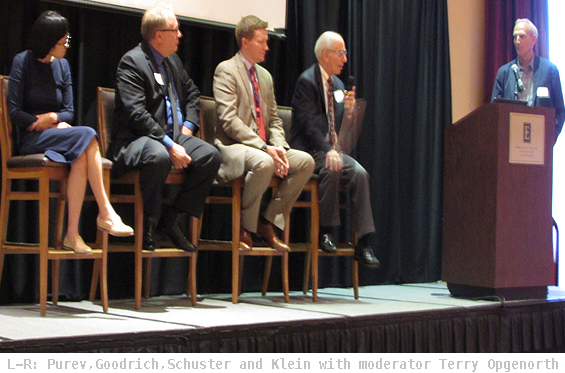 But there’s still much left to be done before these promising treatments can get into the hands of doctors.

And while much is being learned through research and clinical studies, development of cell-level therapies remains a slow and expensive process, according to experts who spoke at the Immunology Summit held Wednesday at Embassy Suites Conference Center.

“Invention is the idea, but that goes nowhere unless you have innovation,” said Raymond Goodrich, executive director of Colorado State University’s Infectious Disease Research Center.

“It has to be something practical for people to use.”

Goodrich was one of six speakers who presented the latest findings on immunology to an audience of about 100 people.

Other speakers included Bruce Levine, professor in cancer gene therapy at the University of Pennsylvania School of Medicine; Patrick Bols, COO of AxImmune; Enkhee Purev, professor of medicine at the University of Colorado School of Medicine; Harvey Klein, chief of the National Institute of Health’s Department of Transfusion Medicine; and Steven Schuster, medical director for Oncology Clinical Research in Northern Colorado.

While the U.S. Food and Drug Administration has approved some cellular therapy products for human clinical studies, the treatments remain mostly in the realm of animal studies with mice and dogs.

Most promising are CAR T-cell treatments that use a patient’s own immune cells -- through cell manipulation -- to be infused into the patient’s body to attack tumor cells.

Levine said the CAR T-cells have been shown to kill cancerous tumors by punching holes in tumor cells.

“That T-cell is a living drug that can go on and kill other tumors,” he said.

Levine described the cases of two clinical studies participants who were able to reach full remission through the use of CAR cells, with some patients still possessing the cancer-killing CAR cells several years after treatment.

Bols, founder and CEO of AxImmune, said his company is developing a product called AX-101 that has shown positive results with no toxic side effects in humans.

“There are indications that we may have something that is important,” he said. “We do have an excellent safety profile.”

Bols said further progress will depend on his company’s ability to obtain research funding.

“We are going to develop this product if we can find the money and the results remain as positive as they are,” he said.

Goodrich said research is demonstrating that using tumor cells from a patient can stimulate his or her immune system to activate against tumors without inducing new tumors to begin to grow.

“The success of CAR is it can be adapted universally,” she said.

But Purev noted that creating CAR cells in the laboratory can take up to four weeks -- which can be too long for patients in the last phase of cancer.

“We need to find a way to shorten that time frame,” she said.

“The effect of the CAR T-cell is really quite dramatic, but not always,” she said. “The question is why some patients respond positively and some do not.

“Although this therapy works, there is much more to be done to really understand it.”

Klein noted that the beginning of gene therapy was first developed in the late 1980s, with the field still in its infancy 30 years later.

Although many advances have been made in that time, much more remains to be done.

“You want cells that not only kill tumor cells but remain persistent in the body years later,” he said.

“This is a very complicated technology and a very expensive technology, but we’ve proved you can do this,” he said.

Cumulative effects of immunotherapies are still unknown at this point, Klein noted.

“We don’t know what the long-term effects will be, but we think it will be better than what we currently have,” he said.

Klein said while Big Pharma companies are investing in cell therapy research, he expects real progress will come from startups.

“Clearly, Big Pharma has made a big investment in this,” he said. “But it’s really been startups and companies already involved in the blood transfusion space” that will take the lead.

Asked when the therapies will be widely available to humans, Goodrich said he expects it won’t be that long.

“If the canine experiments go well, I think we’re looking at a two-to-three-year window for treating human subjects,” he said.