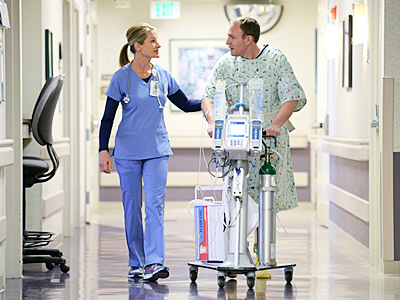 IVEA holds patient-care equipment bedside similar to IV poles, but it also has space for additional equipment and supports the patient during ambulation in a way that improves mobility, safety, and efficiency.

IVEA’s release date last April was immediately heralded with a Silver Medal received at the Edison Awards in New York. Following a successful product launch at the American Organization of Nurse Executives Conference and Safe Patient Handling & Mobility Conference, the word was out and the orders started coming in.

Bayshore Hospital in Holmdel, New Jersey, picked up 10 of the units and Linda Walsh, Bayshore chief nurse executive, attests to its value. “I’ve been in nursing for 35 years and until this device, nurses with a surgical patient would typically be working with have an IV and oxygen. The patient might also have a catheter in their bladder and maybe a cardiac monitor.”

All of this made it difficult to walk a patient, she explains. “Walking is the best thing for surgical patients, so you would have a nurse to hold the patient and a tech to hold the pieces of equipment. It could take anywhere from two to four people to ambulate a patients depending on the number of external devices they needed with them.”

“What IVEA has done for the industry is create this mobility device with the space for the IV pump, an oxygen tank, a catheter drainage bag, feeding tubes, and a cardiac monitor. It’s similar to a walker so we can load all of these on the device and the patient has something to hold onto.”

“The patient has some control over their mobility because they are steering it and there’s only one person walking with them. It empowers them and it’s obviously safer. “There’s also the resource perspective. We can put six pieces of equipment on it and fewer staff members are involved. I wish I had invented it.”

“From discussions with nurses at other hospitals, this is an absolutely intuitive product. Firefly Medical understands what these professionals need to do and the IVEA provides a more effective, efficient and safe way to do the job.”

Hoffman praises the work of Steve Schmutzer, Firefly’s co-founder, director of Clinical Programs, and the conceptual creator of the IVEA. “We worked together on another project, so I saw the evolution as the various versions went through the development process. I saw a good idea blossom into a great one. He really thought this product through from a nursing perspective.”

Hoffman has been in the health care industry for 30 years and says this is a unique situation. “I’ve helped introduce some new medical products and most are an improvement or advancement. This is truly the first time in my career I’m introduced a product where there is nothing like it on the market. It has an instant ‘Wow’ factor to it.”

The idea came from Schmutzer’s 12 years of personal experience as a registered nurse.

“In my years of practice as an RN, I saw the patient care experience as a strange dichotomy,” he said. “On one hand, you had high-tech equipment and on the other you had outdated equipment that had been around since World War I in some cases.

“This was equipment that was once cutting-edge but no longer cutting it. And healthcare had accepted the vices in these settings. Nurses were often trying to manage the equipment and take care of it as much as taking care of the patient. I kept thinking somebody should do something about this. I just didn’t realize it would be me.”

Schmutzer left nursing and, after several other pursuits, he began to look back at some of his past ideas seriously. “The objectives of the design drove the product,” he said. “We didn’t want to just redesign an IV pole, so we started from scratch and it became more like a bedside Swiss Army Knife rather than a Buck Rogers IV Pole. We went back to the drawing board constantly. I contracted with engineers and we had eight different prototypes before we reached the final version. It took multiple efforts and relentless discipline.”

While Schmutzer says the initial concept was his, he refuses complete credit for the outcome.

“The original concept and objective for a new product may have been mine, but we worked with engineers and designers and it was my requirement that we get the active input from clinicians,” he said. “We put this under the noses of nurses and, just from that standpoint alone, we received extensive feedback. Nurses are fierce patient advocates, and when you design from the heart of the nurses you get what the patient most needs. So we ended up with a unique product.”

The IVEA has been embraced quickly, Schmutzer says. “The top five or six major healthcare systems in this country moved fast to develop vendor IDs for us. We’ve had multiple successful trials and we’re getting orders and reorders. It’s been a very welcome reception.”

Firefly Medical in its current configuration was formalized in June of 2013, says Patrick Bols, Firefly Medical CEO. Bols became involved before the company was formed and helped lead the first investment round. “Our investors were mostly individuals but some companies were involved,” he said. “The reaction from the healthcare community has been incredible. We knew we had a winner when we started, but the reactions are overwhelming.”

Helen Taylor, Firefly Medical communications manager, verifies the activity. “We had 60,000 views on Facebook in one week,” she says. “In the last campaign that ran less than two weeks, we reached more than a million people and had approximately 500,000 video views and more than 300 comments on the post.

“It was shared to a Facebook page called ‘Show me Your Stethoscope.’ Nurses started this page and it has a community of 700,000 nurses. From there, it has been shared over 5,000 times. Part of that exposure is advertising, which we pay for, but it’s the sharing that takes it to another level. It’s genuinely viral.”

Taylor says the most the company received from a paid boost was 9,000, so another approach was needed. “Because we’re a startup company with a new product and a small budget, we had to get creative,” Taylor says. “So we did something a little unexpected with a 75-second movie trailer we created to draw people to our site. It’s a little different approach and we’ve seen the website traffic rise substantially and the calls are coming in.”

Walsh sees increased possibilities. “In this next year, we’re going to try using IVEA in ICU. We’re already using it for some of our less critical patients. But we want to trial this with a portable ventilator.

“Typically, these patients are kept in bed until we take out the breathing tube. But if we can get them moving and challenge their lung capacity before that, it will help recovery. For every day they stay in bed, it takes about three days to recover in terms of weakness and wasting, so the sooner we get them up the better. And we can check out lung capacity before removing the breathing tube.”

Schmutzer says his company will expand with other adaptations and products.

“We’re looking at a number of accessories that will make it more appropriate to different situations. We did not put all the bells and whistles on this unit, so there’s room to move this product further. We’re also looking at some other product ideas.”

Bols is already talking to other investors who may want to help that expansion.

“I’m still looking for investments in the company,” he says. “We want to raise around $600,000 for our next venture.”