As CEO, Magued Eldaief brings a wealth of leadership experience to Prescient. A long-time GE executive, he previously led the global commercial operations of the $4B Industrial Solutions business of GE which includes Low Voltage, Medium Voltage, Control & Automation Products & Services. Prior to that role, he was CEO of GE IS for the EMEA region. 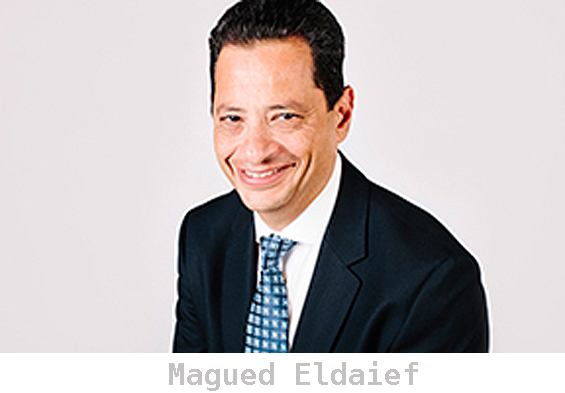 Eldaief started his GE career in 1989. In 1994 he moved to New Delhi to lead GE’s Power generation and service activities in India. In 1998, he was named GE Power Systems Region Executive & General Manager for the Africa/India/Middle East region, based in Dubai, United Arab Emirates. In 2001 he moved to London as General Manager-GE Energy Services Europe and in early 2004, he was named President and Region Executive Asia Pacific for GE Energy based in Singapore. In 2007, he took commercial responsibility for all of GE Energy’s global accounts and partner EPCs and was the Managing Director for GE Energy in the UK until 2012.

Q: Your company claims it is creating a "building revolution." How so?

A: Simply put, we are changing the way multifamily buildings are planned, designed and built. Prescient is bringing a digital solution to an industry that has been slow to digitize. In fact, a recent McKinsey study highlighted that construction ranked 21 out of 22 industries analyzed on adopting digitization.

Our solution changes the construction process from one with thousands of disconnected steps to a seamless process that is linked by our proprietary Digital Thread. This Digital Thread enables design decisions to be made upfront, saving significant money and time over when those decisions are made later in the process. Prescient’s system produces an exact 3D model of the final building directly from architectural schematics, enables accurate upfront costing, automates permit and construction drawings and provides precise bills of material. It then instructs our advanced manufacturing facilities in Colorado and North Carolina what to manufacture, when, and labels every component so they can be assembled on site much faster with fewer skilled workers. To give you an idea, Prescient buildings are assembled at the rate of 20 thousand square feet per week, compared to 10 thousand per week with traditional methods.

Finally, the Prescient Digital Thread collects data throughout the process which is used to inform the project managers on progress as well as to help guide design decisions on future projects.

Q: How is Prescient fundamentally different from other construction companies?

A: Prescient is not a construction company but an end-to-end technology platform that impacts construction by reducing dramatically project cost and schedule and eliminating waste. Our system is used by architects, general contractors and developers to build faster, better, greener and cheaper. The Digital Thread described above is central to the execution of the process. The system is also based on a patented hardware platform; Unified Truss Construction System (UTCS) that enables buildings up to 17 stories be built with efficient light gauge steel (LGS). Using LGS has many benefits over wood and concrete which are the more traditional framing systems often used for multifamily buildings.

Using LGS in our automated manufacturing sites enables Prescient to provide building components that are accurate to 1/32 of an inch, or about 1mm on a 20-foot span. This is orders of magnitude better than can be achieved with wood or concrete. The precision engineered superstructure is akin to a chassis on which every building component can be designed digitally and installed efficiently using an industrial lean assembly mindset. One that enables any building component supplier to have exact specifications and quantity takeoffs that drive supply chain efficiencies and predictable outcomes.

Q: Your website says Prescient's mission is to provide "attainable housing for all." Why do you say that?

A: As you know, there’s a severe shortage of housing in this country and in every developed and developing nation around the world. With rising costs of property, labor and materials, it’s becoming exceedingly difficult to afford to build new multifamily units.  Many renters and homeowners are forced to spend more than the 30 percent of their income on housing -- the maximum recommended amount -- so higher rents aren’t the answer.  Instead, the industry must find  building solutions that enable it to meet demand at affordable price points. That is where Prescient comes in!

We talked earlier about the lack of digitization in the construction industry. This has helped lead to a decline in construction labor productivity rates since 1964. Given the shortage of skilled construction labor on top of material inflation, change is inevitable. Prescient’s system is faster, requiring fewer workers, and lower cost, which helps developers and owners build buildings that people can afford.  That’s why we say our vision is ‘attainable housing for all.’ We have demonstrated that we are a central part of the solution.

Q: What are some of Prescient's design and building techniques that are innovative in your industry?

A: For starters, Prescient has developed both an end-to-end software and hardware platform that spans the total construction value chain. Many companies offer either a software or hardware solution but not both.

The use of our proprietary UTCS and Digital Thread mentioned earlier are both very innovative to the industry as it starts with building design optimization and automation and ends with lean site execution. Our state-of-the-art advanced manufacturing facilities are another part of the innovation we bring to construction. This enables building components to be manufactured precisely (to 1/32” tolerances) through an automated process in a safe, controlled environment. They are then shipped to the site when they’re ready to be installed.

Central to our offer is the library of standardized Smart Plan designs which can be used in multi-family housing such as apartments, student housing, hospitality and senior living. Using these pre-designed Smart Plans offers significant cost and time savings in design and manufacturing.

We have recently launched adjacent innovations as part of our integrated offer such as pre-installed elevator shafts, integrated stairways, metal decking and external sheathing. All these innovations help contractors build faster, safer, with higher quality -- all while saving money and eliminating waste.

A: We are proud of our track record of delivering a continuous stream of innovation. We have recently been certified to provide 5-story buildings for seismic zones up to an R 8 factor and expect to get our ICC certification for taller buildings up to 12 stories early next year. These certifications are game changers in important markets like California that face the “Attainable housing’ challenge.

Prescient is been referred to as the first multifamily housing original equipment manufacturer (OEM) because of our standardized designs and ability to accurately specify requirements for the countless suppliers involved in each of our buildings. To further extend these innovations, we are rolling out  a design marketplace portal where vendors will be able to bid on the millions of square feet of inventory we are working on each year.

Finally, we’re planning to expand to Canada and Mexico in 2019 and then Europe, Asia and Australia  in 2020. This will enable us to bring the Prescient system and all its advantages to cities around the world.