Doug Campbell is a serial entrepreneur with experience in commercializing new technologies in the aerospace, military and cleantech markets. He is currently CEO of Longmont-based Roccor, a manufacturer of space and military products, and Louisville-based Solid Power, a developer of next-generation, all solid-state batteries for the electric vehicle market. 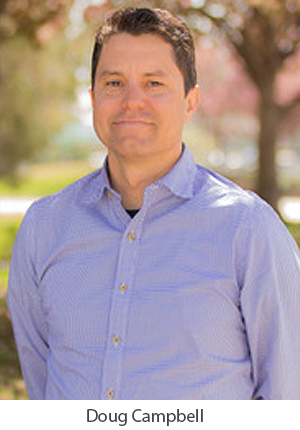 Both companies have experienced explosive growth over the past several years as evident by their ranking by BizWest Magazine as the 3rd and 4th-fastest growing companies during the period 2014-2016. The companies currently support a combined staff of 60 projected to be nearly 80 by the end of this year.

Campbell has considerable experience in securing developmental funding from the federal government, including the SBIR program, having secured >$50M over the past decade. He is particularly passionate about transitioning technologies developed under programs like SBIR into the commercial marketplace. Indeed, although both Roccor and Solid Power were established based on developmental funding from the federal government, the vast majority of both company’s revenues derive from commercial customers.

Campbell holds an M.S. in Civil/Structural Engineering from the University of New Mexico and began his career in new technology development as a research assistant at the Air Force Research Laboratory, Space Vehicles Directorate, Kirtland AFB, NM.

Q: You are the founder and CEO of two successful and fast-growing Colorado companies, Roccor and Solid Power. How did that happen and what overlap is there between them, if any?

A: First and foremost, I am an entrepreneur and opportunist. At the time of founding both companies (2011), both were simply visions and neither had any guarantee of success. The fact that both succeeded is perhaps a case of, “be careful what you wish for!”

As for the mechanics of how they both came about simultaneously, in essence they both incubated out of an organization that I established in June, 2011: i2C Solutions, LLC. I established i2C Solutions immediately upon leaving my last “real job.” The vision for i2C Solutions was quite simple; to leverage my expertise in advanced materials in combination with my experience in government fundraising to build a company that was truly committed to commercializing new technologies funded via Federal programs such as the Small Business Innovation Research (SBIR) program. More specifically, I had spent my decade-long career up to that point working for small businesses that claimed to be focused on new technology commercialization (essentially the mission of programs like SBIR) but were either unable or unwilling to truly commit – i.e., reinvest, sufficiently commit/focus, take necessary risks, etc. The unfortunate consequence was that these organizations were stuck in a perpetual R&D cycle existence with numerous unfinished projects and products, which I found highly unsatisfying.

Both Roccor and Solid Power came into existence through partnerships with others. In the case of Solid Power, I was approached by my two co-founders, both Professors at the University of Colorado Boulder. In the case of Roccor, it was a shared vision between myself and my co-founder and now VP of Engineering, Will Francis.  In both cases, the companies incubated within i2C Solutions for 1-2 years as their business plans matured and external stakeholders and funding sponsors were engaged.  It wasn’t until late 2013/early 2014 that both businesses were self-sustaining.  Both were co-located in a facility from early 2014 through mid 2016 at which point both organizations had outgrown this shared resource arrangement. Ultimately, i2C Solutions and Roccor were able to merge in early 2016 based on the shared incentives of their respective shareholders thereby leaving Roccor as the surviving entity.

While both Solid Power and Roccor were established based on funding from federal sources such as SBIR, both have been wildly successful in transitioning to market-driven, product-focused companies.

Q: What part of your background led you into founding startup companies based on these technologies?

A: In the case of Roccor, my technical background is in composite materials and satellite deployable structures, which is a significant technology focus area for the company.  This expertise extends back to my graduate research work at the University of New Mexico and my research assistant role at the Air Force Research Laboratory, Space Vehicles Directorate, a role I left in 2002.

In the case of Solid Power, my experience in energy storage technology was gained via a two-year tenure at a Colorado-based small business beginning in 2009 where I “inherited” a struggling advanced lithium-ion R&D group. Knowing little about energy storage technologies at the time, I quickly brought myself up-to-speed and focused the group on niche military applications such as batteries for small, man-portable UAVs. During my two-year tenure at this organization, I was able to quickly grow the group’s capabilities and customer-base leaving it highly sustainable upon my departure in 2011. This group continues to exist and its business model has remained largely unchanged with a continued focus on niche military batteries. It was the direct result of this experience that prompted the two CU-Boulder Professors to approach me regarding establishing a start-up business based on their research in advanced, all solid-state rechargeable batteries. I agreed, we co-founded the company in 2011 and secured our first funding in late 2013 in the form of a very large grant from the Department of Energy’s ARPA-E office.

Q: Solid Power’s mission is to develop “the next-generation of all solid-state rechargeable batteries,” according to your website. What is special about your battery technology that’s not seen in other batteries now available or under development?

A: Broadly speaking, the energy storage industry and associated end users (i.e., sellers of products heavily dependent upon battery performance – e.g., mobile electronics, EVs, etc.) have expressed tremendous interest in all solid-state rechargeable batteries because of their strong potential for: 1) higher energy at the cell level, 2) improved safety over current lithium-ion which translates into improved product reliability and lower cost due to the ability to mitigate/eliminate safety features associated with current lithium-ion batteries and 3) lower cost enabled both by improved safety and the use of lower cost materials. As a reminder, higher cell-level energy directly translates into improved life for the battery-powered product – e.g., longer run-time per charge for mobile electronics, greater range for all electric vehicles, lighter weight portable electronics for military soldiers, etc.

A key differentiator of Solid Power vs. competing solid state battery technology is a combination of unique material and low-cost manufacturing. More specific, Solid Power’s materials are able to indeed achieve the energy potential that solid-state batteries provide (through compatibility with very high energy (capacity) electrodes that are not compatible with current lithium-ion) while also meeting other key requirement such as power (rate of current draw), operational temperature range, safety, etc. Further, Solid Power’s technology is manufactured used existing roll-to-roll process as used in traditional lithium-ion cells. Thus, it has substantial potential as a drop-in replacement for lithium-ion cell production while providing further cost savings via the use of lower cost material. This is an especially notable achievement as many competing solid-state battery technologies require costly, deposition-based manufacturing processes.

Q: What is the main focus of Roccor, and who are the company’s primary clients?

A: Roccor is a space and military products company. The company began as a provider of high performance and low-cost deployable structure systems for commercial and military satellites. More specifically, a satellite can be thought of simply as a main bus structure that contains the satellite’s payload and numerous other appendages that are necessary to achieve the payload’s mission such as communication, power generation, shielding, etc. Many of these appendages must be packaged or, collapsed, about the satellite bus structure in order to fit within the launch volume (i.e., within the launch vehicle fairing). Once in orbit, they deploy to their intended shape in order to perform their function, hence the term deployable structure. Roccor specializes in low-cost deployable structures including stand-alone booms, hinges, solar arrays, antennas among several others. Our competitive advantage lies in our technology focus; the use of “High Strain Composite” (HSC) materials that allows for comparable performance vs. legacy mechanically-based systems at substantially lower cost due to greatly reduced part-count, lower cost part manufacturing and ease of assembly.

The company’s customers are a combination of the U.S. military (e.g., U.S. Air Force, Missile Defense Agency, U.S. Army, etc.), established U.S. Defense primes and commercial satellite owners. Of particular noteworthiness, Roccor was awarded a development and production contract for the largest ever satellite solar array production based on total number of units. The customer is an International commercial satellite constellation owner, which will be made public in the coming months.

Q: What is it about being located in Colorado that lends itself to the advancement of your companies?

A: Colorado is perhaps the most ideal location for the creation and growth of both Roccor and Solid Power.  Colorado has a highly robust economy, a large and well educated professional population, an excellent University system in terms of relevant technology and students produced and above all, an exceptionally strong entrepreneurial spirit with good access to capital. Further, Colorado’s high standard of living, high quality of life and overall attractiveness have proven to be a strong asset in terms of out-of-state recruiting. Further, Unlike Southern California and the Bay Area, however, the cost of living still remains relatively affordable.

Finally, the State has proven to be exceptionally committed to supporting small, high-technology businesses as evident by the creation of the Colorado Office of Economic Development and International Trade’s (OEDIT) Advanced Industry Accelerator (AIA) grant program. Both Roccor and Solid Power have been past recipients of this cost-match grant program and in both cases, the funds were instrumental in allowing the companies to invest internally in order position for follow-on sales and revenue growth.