FORT COLLINS -- Apple Vice President Tara Bunch wore her sleek black Apple Watch proudly on stage Friday, touting its technical breakthroughs on the same day the watch was being made available to consumers across the nation.

“I view it as something very deeply personal,” she told an audience at Colorado State University during the 10th annual “FutureVisions 2020 Symposium" on April 24 in Lory Student Center Theater. “I’ve been wearing it for about four weeks now, and I really love this thing.”

Bunch said the watch helps her count her steps and calories and set personal health goals while performing nearly all the things a typical smartphone can do.

And all without the fumbling for a cell phone while driving or interrupting a conversation with another person, noting that the average smartphone user looks at their device about 150 times a day.

“Now we have a device that we can be connected with (the Internet) but be more subtle.”

Bunch predicted the Apple Watch would be another hit device from the world’s biggest and most successful tech company.

“People adopt something – embrace something – because it makes them feel great,” she said.

Bunch, who joined Apple in 2012 after 20-plus years at Hewlett Packard, once attended CSU and recalled her days walking the university campus and streets of Fort Collins.

Bunch was the closing keynote speaker for a full afternoon of tech experts who took part in the symposium, which was open to the public but mainly aimed at CSU students.

“It’s very hard for most of us to think exponentially,” he said. “We tend to think linearly, but at CableLabs we spend a lot of time looking across the future.”

McKinney said CableLabs could be thought of as “the Bell Labs for cable,” developing the new technologies to advance the industry. 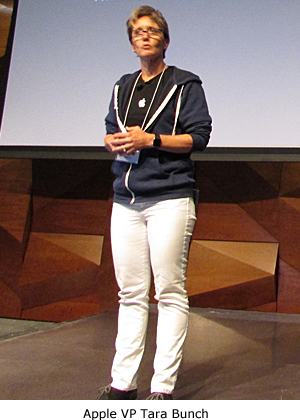 One of the biggest, most exponential advances coming soon will be in data storage, McKinney said, citing new dot-sized memory chips that require no batteries.

“Storage is going to see absolutely explosive growth in the next five to eight years,” he said, adding that it could change what gets stored in the cloud.

McKinney also noted that a new technology called quantum dots is going to have a huge impact on HD TV, which now can only project about 38 percent of true color.

“You’re going to see a complete shift in how TV and video is recorded,” he said.

McKinney also cited continued improvements in 3D printing and virtual reality as other tech advancements that will see dramatic acceptance in coming years.

“Virtual reality is off the scale,” he said. “Consumer interest in VR is extremely high.”

McKinney said CableLabs is always looking for new employees who can think outside the box and even seeks out people with autism.

“We all tend to look at problems the same way,” he said. “We hire researchers on the autism spectrum because they look at everything differently.”

Also addressing the symposium was CSU’s own Amy Prieto, a chemistry associate professor whose research into lithium-ion batteries resulted in the founding of Prieto Battery in 2009.

Prieto said the demand for better batteries is likely to keep growing exponentially, outstripping the battery industry’s ability to keep up.

“Battery demand will continue to be strong, but battery improvements are not keeping up with the technology,” she said, noting there have been “no significant, sustainable improvements in battery technology in more than a decade."

Still needed, Prieto said, are new technology breakthroughs in faster battery charge times and longer life between charges -- and the ability to provide power for a growing spectrum of uses.

“There is no one perfect battery for every application,” she said.

Also speaking at the FutureVisions Symposium were tech writer Clive Thompson in a teleconferenced Q&A from New York City on the future of human intelligence augmentation; Anders Gronstedt, founder of Gronstedt Group, which uses gamification techniques to help improve employee performance; and Nezette Rydell, meteorologist-in-charge at the Boulder office of the National Weather Service. 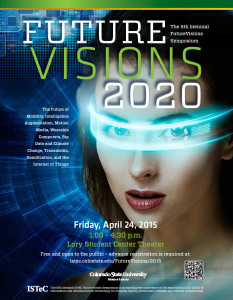 Rydell said an explosion of weather Big Data in recent years is helping to deliver more accurate forecasts, resulting in fewer humans needed to be part of the forecasting process.

“A valid question is does a human need to be there at all,” she said. “I think there does, because weather forecasts need interpretation. They can’t stand alone.”

The biennial CSU FutureVisions 2020 Symposiums are organized and presented by the CSU Information Science and Technology Center (ISTeC) executive committee. This year’s co-chairs were David Ramsay and Pete Seel.

Seel, a journalism and media communication professor, was honored at the conclusion of the symposium for his work in helping to organize the events over the last 10 years.

“It’s all about delivering visions of the future to our students,” Seel said. “We want students to be thinking about their focus and how to plot their career trajectories to intersect with those visions.”