The largest hemp business event in the U.S. -- if not the world -- the Expo drew more than 100 businesses specializing in hemp products and ancillary services, plus legal advocates, artists and dozens of speakers. 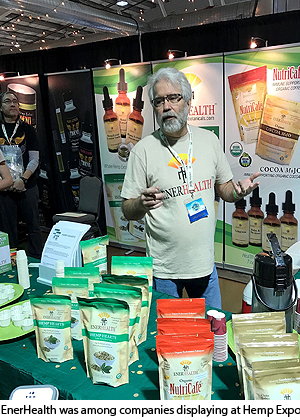 Shortly after hemp’s legalization under Amendment 64, a group of thought leaders organized the first NoCo Hemp Expo, an inauspicious meeting held in a Loveland bar.

By its third year, the event had become a Mecca for hemp entrepreneurs and activists. The list of speakers, vendors and sponsors reads like a Who’s Who of industry players.

Hemp didn’t draw nearly the attention of the legal marijuana industry out of the gates, but the Expo -- now held at The Ranch Events Complex -- has gone far beyond its low-key origins.

For Dr. Christopher Shade, CEO and founder of Lafayette-based THR Technologies, nutraceutical cannabis was a natural extension of the company’s previous work in natural products.

THR, a subsidiary of Quicksilver Scientific, specializes in lipid nanoparticle technology for use in dietary supplements.

“Quicksilver developed around technologies for assessing and treating metal toxicity in people,” said Shade. “To effectively treat people we needed to develop a better delivery system for nutraceuticals.

“And we used lipid nanoparticle technology for making little spheres -- sometimes called liposomes -- to increase absorption of nutraceutical compounds in the GI tract. And as we made these better and better, we got them so they’d absorb right through the oral cavity into circulation.”

A superior extraction process should result in a repeatable, metered, predictable dose, Shade said. Based on THR’s previous work on products like green tea extract and resveratrol, Shade said the medical cannabis industry was an obvious fit.

Since most Colorado-grown hemp is used for consumables such as tinctures, industry players are grappling to refine the chemical extraction process to maximize purity, bioavailability (think absorption) and palatability.

The plant contains compounds including cannabinoids and terpenes that are increasingly sought after for their medicinal properties. Best known among many, cannabidiol (CBD) has been used to formulate medications undergoing FDA testing for Dravet Syndrome, a crippling form of epilepsy.

THC, the main psychoactive compound in cannabis, is essentially absent in hemp. By legal definition, hemp must contain less than 0.3 percent THC on a dry weight basis.

So while it can’t get people high, the legal distinction between hemp and “marijuana” is somewhat arbitrary.

Hemp’s nutritional value is another industry focus. Longmont-based EnerHealth Botanicals recently distinguished itself by becoming the first company to get U.S.-grown hemp seeds on grocery shelves.

Robbie Jaramillo, the company’s director of customer support and sales, said he is proud of this milestone.

“One of our aims when we developed the product and started with the R&D … was to have a 16-ounce bag cheaper than [industry leader Manitoba Harvest]. And at the Natural Grocers store it is. It’s cheaper by 10 cents.”

Jaramillo said he believes the much more mature Canadian industry is supportive of America’s emerging hemp market in spite of the inevitable competition.

The considerable majority of all Colorado hemp is grown for self-care and medicinal products derived from its oils. Its highly-nutritious grain contains all nine essential amino acids and a healthy accompaniment of fatty acids, yet less than 10 percent of all plants cultivated in the state are for food.

For those yearning to see hemp’s industrial potential unleashed, the gaping infrastructure gap for processing hemp fiber and stalk is the key issue.

The processing machinery required for seed, clothing, rope, composites and other purposes varies considerably. Because hemp farms tend to be small and have unique needs, a small number of firms like Power Zone Equipment, Inc. are designing and retrofitting farming equipment to suit the individual needs of growers.

“We build custom stuff, so we’re building directly to a farmer’s needs, directly to a specific purpose as opposed to trying to find out what’s something that might work for a lot of people and then requiring them to conform to what we want them to.”

The company's Grasshopper is a decorticator of Maston’s design. Decortication separates hemp fiber from hurd, which is necessary to process industrial hemp but very few such machines are available in the U.S.

Hemp can be used in building materials such as drywall and “hempcrete”-- a hemp-lime mixture with some advantages over concrete -- as well as textiles, rope and composites used in car panels.

Hemp fiber is the strongest plant fiber found in nature. Yet while the plant’s durability is fundamental to its industrial value, it also makes it challenging to process.

In 2015, Colorado had 8,844 acres registered for hemp cultivation -- far more than every other state combined. Kentucky, the runner up, had slightly more than half that figure.

Expo organizers said hemp is extremely versatile and holds great promise for its industrial and medicinal properties. And while the infrastructure and economies of scale aren’t quite there, the Centennial State seems likely to remain the industry’s vanguard.

About the Author: John Garvey

A business journalist and freelance writer, John Garvey has written on an array of topics for over a half dozen magazines and news publications.  His favorite subjects to write about include the Colorado hemp industry, passive architecture, wellness, business model innovation, and anything that’s brewed, distilled or fermented.  John is raising two children bilingually in Fort Collins and is the founder and president of North FoCo Pub Runners.  He can be reached at [email protected]