FORT COLLINS -- Female entrepreneurs are just like their male counterparts when it comes to seeking out angel investment to help launch their startup business.

But as women they may need a little extra direction in a generally male-dominated investor world. 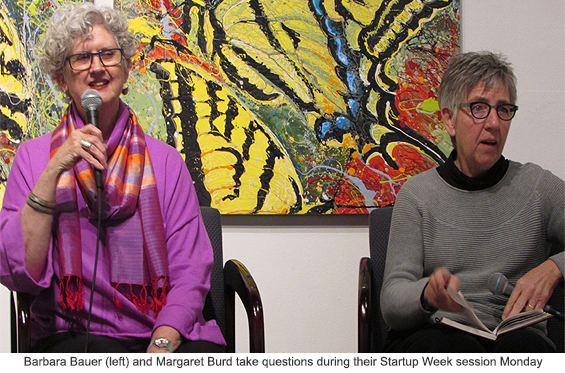 Going out for a beer with a potential male investor -- as is sometimes the case with male entrepreneurs seeking funds -- is probably not the best approach for a female entrepreneur.

But taking a potential investor out for coffee -- and possibly lunch at some later date -- is a better way to get to know that investor and perhaps score some investment once a rapport has been established.

That was part of the message Monday from Barbara Bauer and Margaret Burd, two veteran investors and startup entrepreneurs who led a Fort Collins Startup Week session called “Women Angels and Investors.”

Both women are members of Rockies Venture Club’s Women’s Investor Network (WIN), with Bauer serving as its director.

The goal of WIN, said Bauer, is to help more female entrepreneurs find the investor support they’ll need to get their startups up and running -- and to encourage more women to become angel investors.

“Begin by getting to know the community of investors before you need to ask for money,” said Bauer.

After a rapport has been established, there are several things to keep in mind when approaching a potential investor, the pair said.

“You need to understand the side of the world from the point of view of the investor,” said Burd.

“Investors are typically focused on a niche, whether that be health care or software, whatever,” said Bauer. “But no matter what the sector is, is it an idea or product that matters?”

She noted that investors are interested in things like customer feedback, financial projections and a strong business team.

“These are an indication of how thoroughly you’ve thought about your company -- that’s what we look for,” Bauer said.

“You need to have a business model that can scale and appear to be worth the (investment) risk.”

Burd said startup entrepreneurs shouldn’t worry about a potential investor stealing their idea when they seek funding, but they should still be careful when discussing their intellectual property.

“People you’re gonna talk to aren’t going to steal your idea,” she said. “But don’t tell them something you don’t want them to know.”

“Part of the due diligence will be the safeguards you have to protect your intellectual property,” added Bauer.

Sales is another factor that angel investors like to see before putting their money into a fledgling business.

“One of the things we want to see is evidence that the market wants your product, and typically that’s sales,” said Bauer. “It’s called evidence of traction.”

Bauer said most angel investors who are investing their own money are usually looking to invest between $500,000 and $1.5 million.

Another factor angels look for, Bauer said, is “coachability.”

“We seek entrepreneurs willing to listen to investors and other people with experience,” she said.

But entrepreneurs should also be adept at sizing up a potential investor, Bauer noted.

For new startup owners seeking a grounding in the world of investment, Bauer suggested Venture Capital for Dummies” a book written by Peter Adams, director of Rockies Venture Club, that she called “really angel investing 101.”

She also encouraged startup entrepreneurs to attend monthly RVC-hosted investor meetings and the next RVC Angel Capital Summit set for March 21 in Denver.

Monday was a full day of free Fort Collins Startup Week sessions spread across several venues mostly in the downtown area. For a full schedule of events planned for the week, click here.

While previous Startup Weeks have featured big pitch competitions and more glitz, Schneider said the events now have more of a “grassroots” feel, with more community organizers and resources stepping up to make it happen.

“We want to help anyone with a worthy idea to make a go of it,” he said. “After spending a week with us, they’ll understand their idea so much better.

“Putting that power in the community’s hands is why all these people step up to help, and that’s a powerful investment in our community.”