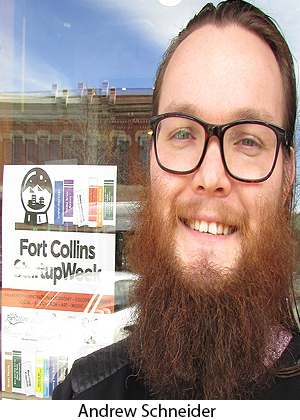 Schneider, 32, is a spokesman for a group of organizers for this year’s Fort Collins Startup Week, which kicked off Monday and concludes Friday.

Schneider is a self-described “creative entrepreneur” who moved to Fort Collins from Wyoming when he was five. He later spent several years going to school and working across the country but decided to move back to the Fort nine years ago.

He’s a co-founder of NoCoast, a collective of art and media makers, and Create Places, the organizing entity for this year’s Startup Week – the fourth since its founding in 2014.

Schneider is quick to note that he’s had a lot of help putting this one together.

“It’s a giant team that’s working on this that started with a core group of nine,” he said.

A big team was needed to pull together this year’s FCSW because planning didn’t get started until November after the surprise announcement that Denver-based Galvanize was pulling out of Fort Collins after just over a year.

Schneider recalls having more than a hundred coffee meetings with co-organizers and event participants over the last four months to line up the 250 speakers and 116 final events approved for the week.

“There were close to 200 event submissions,” he said. “But I think the final number is a good number that keeps all the venues busy enough without overburdening any of them.”

Schneider says the Fort Collins community stepped up to help make the weeklong event a reality.

“We didn’t have too push too hard,” he said. “People were really eager to get involved.

And finding content for this year’s Startup Week was also a gratifying experience, he said.

“People – as of last Friday – were still trying to get on the schedule.”

For anyone who hasn’t been to FCSW yet, there are dozens of free educational and networking events happening every day. While many are technically full, standing room is often available and some still have open seats.

For details, check out the FCSW schedule.

On thing that’s new this year, Schneider noted, is an emphasis on the arts and music as startup businesses.

“Bringing in the creative industries and music has really opened up new people’s eyes to Startup Week, something that makes us pretty unique in the world of Startup Weeks,” he said.

“Personally, I find it very rewarding to help artists and musicians realize they are startup entrepreneurs.”

Boulder-based Techstars has been lending its support again this year to FCSW, as it does to other Startup Weeks in Boulder, Denver, Longmont and Colorado Springs. And Loveland is planning to hold its second Startup Week next month.

“(Techstars) provides technical support whenever we need it,” said Schneider. “They have been a great partner for any need we have.”

Schneider, who said he’s been spending 19-hour days at Startup Week, said he’s enjoying himself too much to get tired.

“It’s been an incredible joy and a privilege to help put this together,” he said.

“And the community has really rallied to make this happen. If one (startup) person can meet another co-founder and a company is founded, then it really pays off.”

Schneider, who has a strong interest in building healthy neighborhoods and communities, said that aspect is a big part of FCSW.

“Let’s create a culture of having fun, looking out for each other and paying it forward,” he said. “They exist here already, and we just need to shine a light on them.”

Schneider will have to get in some rest quickly after this year’s Startup Week ends. That’s because planning for the 2018 Startup Week – Feb. 26-March 2 -- gets underway later this month.

“I tell people just imagine what we could do with a full year of planning,” he said.