FORT COLLINS -- Startup entrepreneurs who think they can raise some fast and easy cash on Kickstarter – the most popular crowdfunding platform – with little planning and little personal investment are likely in for a shock, according to a Loveland entrepreneur who shared his Kickstarter experience Wednesday during Fort Collins Startup Week. 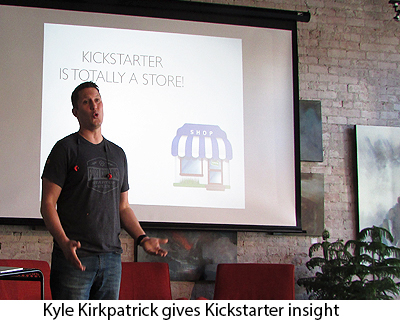 In his presentation, “Kick-Ass Kickstarting,” Kyle Kirkpatrick, founder of Decibullz custom earbuds, told an audience at Galvanize Fort Collins  that -- while he raised nearly $400,000 through two Kickstarter campaigns to successfully launch his business, the chances of a typical startup to do the same would take a great product, professional marketing and solid planning and execution.

Kirkpatrick, who launched Decibullz in 2013, said his first Kickstarter campaign raised almost $113,000 on a $40,000 fundraising goal. That might seem like a sweet success, but Kirkpatrick noted that underestimated campaign costs in video production, photography, marketing, and crowdfunding fees ended up with the campaign basically breaking even.

It wasn’t until he had learned some valuable lessons from the first campaign that a second campaign was able to accumulate some real cash – about $250K – and get Decibullz rolling.

According to Kirkpatrick, startups seeking to use Kickstarter should add at least 25 percent to any funding goal they may be thinking. And before launching a Kickstarter campaign, an entrepreneur should spend three to six months planning it.

“A lot of people think Kickstarter is free money, but it’s really not,” Kirkpatrick said. “It’s a gamble, and you can put a lot of time and money in it and it might not get funded at all.”

But even without getting a lot of funding, Kirkpatrick said a Kickstarter campaign can be a valuable investment because it allows a product to get market tested.

“Even if it doesn’t get funded, that’s a lesson and you can take that feedback and find out how you can make your product better,” he said.

Kirkpatrick’s presentation was one of several offered Wednesday during the third day of the third annual Fort Collins Startup week, Feb. 1-5.

Most of the week’s presentations and activities are being held at Galvanize Fort Collins, 242 Linden St., and at Innosphere, 320 E. Vine Drive. But other locations are also hosting events, including The Artery, 252 Linden St., which was the site Wednesday afternoon of a CSU Ventures Demo Day with three Colorado State University-originated companies giving demonstrations of their technologies.

Startup founders of E-Flux, Living Ink Technologies and The Fair App gave short presentations of their technologies. E-Flux, founded by Julio Zimbron, was started in 2012 and is finding success with its product that measures and reports on soil contamination incidents.

Living Ink, founded by Scott Fulbright and Steve Albers in 2013, is taking algae and turning it into bioproducts for consumer goods, including greeting cards that form pictures and messages as the algae-infused paper dries. 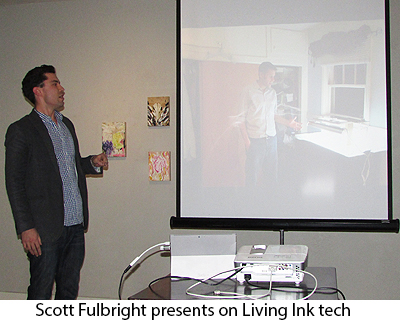 And Jeremy Podany and Chris White, creators of The Fairs App, presented their just-launched free smartphone app that aims to help event attendees have a better experience.

“What we intend to do is provide customized solutions for new startup companies,” he said.

Opgenorth said university-originated technologies have the option of licensing their technology to an existing company or deciding to form their own.

If they decide to form their own business, Opgenorth said the NewCo Launchpad can help put the startups in touch with resources they need.

“We’re trying to be more intentional about integrating with the community to tap into the resources out there,” he said.

CSU Ventures is the commercialization arm of Colorado State University-originated technology and helps support five or more new startups each year, Opgenorth said, with 52 now in its active portfolio.

CSU Ventures has helped launch 563 inventions over the last five years, with 92 in FY 2015, Opgenorth noted.

Patti Smith, a Fort Collins health education consultant representing the Zonta Club women’s service organization, said she wanted to be at this year’s Startup Week because of a positive experience when she attended in 2015.

“I went last year, and I came back this year because of all the wonderful contacts I made to help me with things I didn’t know,” she said. “It’s a wealth of knowledge for people if they’re willing to participate.”

Charisse Bowen, director of the Galvanize Fort Collins campus and a main organizer of the third annual Fort Collins Startup Week along with Christine Hudson, said the snowy weather played havoc with the first two days of the week but did not stop the show.

“The weather threw us for a loop but we were able to reschedule 9 of 12 events, which was great,” she said. “I’ve had a lot of people come up and say great job on managing that hurdle, and that felt good.”

A full schedule of the remaining week’s events is available by clicking here.

Bowen said attendee numbers have been good, with well over 300 as of mid-day Wednesday. “I’m very happy with that,” she said.

And she noted that Thursday and Friday are filled with more events and – with better weather in the forecast – attendee numbers are expected to grow significantly.

Bowen noted that while so far not that many attendees have come from out-of-state – understandable with the wintry conditions seen Monday and Tuesday – there have been “a lot of people from around the state” coming to see what’s happening in the Fort Collins area startup scene.

Bowen said that’s fine with her.

“I feel the more local it is, the more magic is going to keep happening after the week is over.”