FORT COLLINS -- So you live in Northern Colorado and believe you have a great business idea -- but you’re not sure how to begin your entrepreneurial journey.

You have questions: How do I pitch it to potential investors? What about my pitch works and what doesn’t? Who and where are the people who might be able to help me take this to a successful launch? 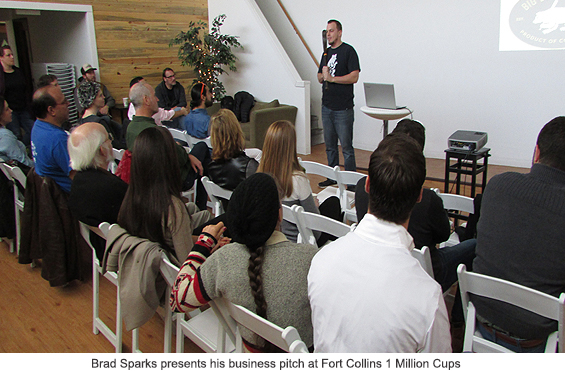 “It’s nice to offer a platform for that,” says Nathalie Rachline, one of the current 1 Million Cups organizers.

“In some cases, it’s pitch practice. Other times, it’s just coming together to hear presentations. There’s a group of people who come regularly, so that’s great.”

One of those who shows up regularly for the weekly Wednesday morning meetings over cups of coffee is Mike Bennett, a retired political operative and financial consultant.

“This keeps me up on what’s happening in the business world,” he said. “I do financial modeling for (presenters) on a pro bono basis, and I think I’ve helped about 10 of them so far.”

Bennett says he believes the 1 Million Cups venue is a good one for aspiring entrepreneurs, who get questions and advice after their six-minute presentations.

“They get feedback,” he said. “Some of it’s good, some not as good, but it’s not like Shark Tank. It’s done with respect and in a positive way.

“It always amazes me -- the different ideas people have.”

At a recent 1 Million Cups meeting, two entrepreneurs with very different ideas made their presentations to about 30 people.

Dylan Cruise, making his first appearance before a Million Cups audience, presented his idea for a business called Jade that offers an app to legal cannabis dispensaries to help them keep up with a mountain of government requirements and track their business operations. 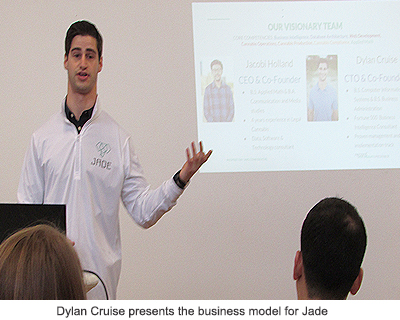 “In this complicated, very young legal industry, you have all these disparate softwares you have to use and none of them talk to each other,” he said.

“Jade is looking to be the single source of information these companies rely on.”

Next up was Brad Sparks, who presented his idea for a company called Big Bear Bat Company that offers custom bats for professional and nonprofessional baseball players.

Sparks said his business plan is to create made-to-order, top-of-the-line wooden bats every bit as good as those now selling for $120 each for about $100.

Sparks said pro ball players use an average of 120 bats each 162-game season, and those players look for high-quality bats that can help promote their personal brand.

Sparks said he was glad he presented to a group that peppered him afterward with many questions and words of advice.

“It was extremely helpful,” he said. “Being able to learn from people who’ve gone through it and know what investors want to hear is huge.”

Founded in January 2014, Fort Collins 1 Million Cups has had a peripatetic existence, now in its fifth downtown location at The Articulate, 342 Jefferson St.

The Articulate provides the space for the meetings, and Linden Street Café provides the free eye-opening coffee. 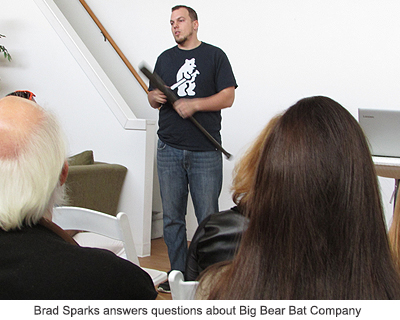 According to Porter, all three came up with the idea for a Fort Collins 1 Million Cups almost simultaneously and all three were invited to fly to Kansas City to learn about the program from the Kauffman Foundation, which launched 1 Million Cups in 2012 to support entrepreneurship and community vitality.

In January 2014, Fort Collins became the second city in the state -- after Denver -- to host a 1 Million Cups program. At the time, there were only 23 1 Million Cups communities across the nation and now there are more than 100.

“It was the culmination of a lot of startup activity happening in Colorado, including Startup Weeks and the 1 Million Cups that had been established in Denver,” Porter said.

“I think we all (three) had the same goal of connecting startup communities throughout the Front Range,” she said.

There are now also 1 Million Cups programs in Boulder and Colorado Springs.

“It helps companies refine their ideas, get feedback on their presentation skills -- basically get advice from people who have gone through that experience to improve their products and their pitch.”

Porter says she’s heartened by the continuing growth of 1 Million Cups in Colorado.

“I think it’s wonderful,” she said. “I believe the whole startup community on the Front Range has matured since then, and it’s very gratifying that there’s still an organization that can support that activity.”

Today, the Fort Collins 1 Million Cups program is a meetup under the umbrella of LaunchNo.Co, which has the same goal of helping local entrepreneurs achieve success.

Jana Sanchez, LaunchNo.Co executive director, says she found 1 Million Cups to be very helpful after she was laid off from her job and wanted to launch a business of her own.

“I didn’t know how to get into the entrepreneurial community in Fort Collins,” she recalls. “Million Cups was an organization that could tell me how to do that, what I was doing right and what I was doing wrong.”

“I think we’re getting to the point where entrepreneurship is finally getting out of people’s basements,” she said.

“When Million Cups started, it brought people up and into the light and for people to connect and allowed business to thrive and grow.”

Sanchez said the city of Fort Collins is planning to do a survey in 2018 of startup businesses that don’t yet have a sales tax license and are flying under the radar.

“I don’t think (the city) has any idea of the scope of this group of people,” she said. “But it’s one of those intangible drivers of economic development.”