FORT COLLINS -- Successful entrepreneurs are not immune to failure but find the motivation to go on and succeed because they can’t let others or themselves down. 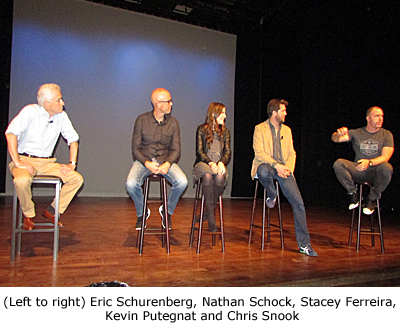 That was the message of a panel discussion on “Real Failures, Real Lessons Learned from Really Successful Entrepreneurs” on Tuesday during Fort Collins Startup Week 2015.

“It’s the most meaningful thing in the world, but it’s tough – because it takes everything and you still fail,” he said.

Kevin Putegnat, an Austin, Texas-based serial startup entrepreneur, said it is hard to not give up on a dream when things go sour.

“I think doubt and fear is an innate part of being an entrepreneur,” he said. “But I look at my family and I know I can’t let them down.”

Nathan Schock, CEO of South Dakota-based Locals Love Us, said failure has its good side.

“Not only does it motivate us, but it also grounds us,” he said.

Stacey Ferreira, who sold her web security company at age 20 and is now working on a new startup, said she fights failure by thinking about her team.

“Your team is trusting you with their livelihood,” she said. “If they believed in you when you started, you’ve got to keep believing in yourself.”

Snook said his worst moment as an entrepreneur came in 2012 when a business partner first said he wanted out of the company. Snook said his first reaction was to let him go but he ultimately persuaded his partner into staying.

Schock said perseverance is key to surviving the inevitable setbacks.

“You have to remain focused, because if you get crushed by the first failure, you’re not going to be around long,” he said.

Panel members said staying humble after success was good for their mental health.

Putegnat said he focuses more on his failures than his successes.

“I don’t really celebrate the successes but I do lament the failures,” he said.

But Snook said he disagreed with that philosophy.

“Celebrate the wins, because that will help you move on to the next one,” he said. “Stack the wins because you will get hit by bumps later and you need to remember them.

“Always remember the sun is going to come up tomorrow and you’re not dead,” he said.