FORT COLLINS -- The world is on track to significantly reduce greenhouse gas emissions and fight back against climate change through the Paris Agreement signed by 191 nations, including the U.S. 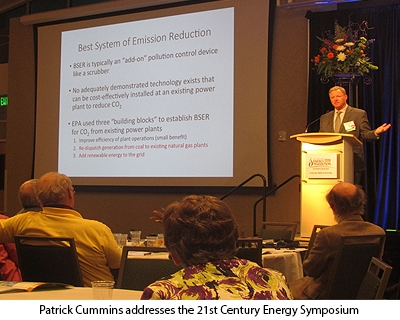 But political and financial hurdles still lie ahead as the process of final implementation of the agreement continues, attendees of the 21st Century Energy Transition Symposium on the Colorado State University campus heard from speakers on Wednesday.

“The success of any agreement is in its ability to be implemented,” said Michele Betsill, professor and chair of the Colorado State University political science department.

Betsill praised companies like Walmart and cities like Fort Collins for taking a leading role in advocating for climate change action.

“Fort Collins is a global leader in this regard with the city’s ClimateWise program,” she said.

ClimateWise is a free voluntary business program that encourages the adoption of strategies proven to use energy, water, and land more efficiently, while generating less waste, lower operating costs and reducing greenhouse gases.

While 61 nations have ratified it so far, they account for only 47 percent of the greenhouse gas emissions, Averill said.

The next meeting to discuss and fine-tune the agreement is in Marrakesh, Morocco starting Nov. 7. The agreement aims for implementation by 2020.

Averill said the agreement is on track to be ratified “years earlier than people thought” but noted that the politics of each nation could derail that.

“Please don’t believe the politics are behind us in the Paris Agreement,” she said.

Averill said she expects progress to be made at the Marrakesh session on monitoring and reporting in the agreement but noted that funding will likely remain a sticky issue.

“Everything in climate change will cost a huge amount of money, and it will remain a big point of contention,” she said.

Averill noted that the basic premise of the Paris Agreement remains simple.

“We want to slow down climate change to keep it from happening fast, at the least,” she said, noting that some island nations and coastal villages are already feeling the impact of climate change through rising sea levels.

The 21st Century Energy Transition Symposium – formerly known as the Natural Gas Symposium – is the sixth annual gathering of academia, government and industry representatives to tackle some of the most vexing energy challenges.

Patrick Cummins, senior policy advisor for the Center for the New Energy Economy (CNEE) at CSU, said much of the Clean Power Plan’s efforts lie in reducing greenhouse gas emissions from the nation’s coal-fired power plants.

And while coal plants have reduced sulphur dioxide emissions by about 80 percent over the last 20 years, there is still much left to do, Cummins noted.

The CPP rule was finalized last year and final standards must be met by 2030, but the U.S. Supreme Court in February put the plan on hold.

“Everything about the Clean Power Plan is now on hold indefinitely,” he said.

But Cummins said he remains confident the plan will eventually be implemented as long as states like Colorado continue to push ahead on its goals.

“Can we expect to be successful? I would say yes,” Cummins told an audience of several hundred. “It’s important to get a plan in place that can be improved over time.

“We really are at the beginning of a long-term effort to address this.”

The 21st Century Energy Transition Symposium is hosted by the Center for the New Energy Economy – part of the CSU Energy Institute – in partnership with the CSU School of Global Environmental Sustainability.