FORT COLLINS -- Politics and partisanship should not be roadblocks when it comes to creating solutions to the challenges surrounding the ongoing transition to an energy future that is sustainable and doesn’t harm the planet.

That was the message shared by three current governors of Rocky Mountain states on the second day of the 2017 21st Century Energy Transition Symposium on Tuesday.

The symposium brought together governors John Hickenlooper of Colorado, Steve Bullock of Montana and Matt Mead of Wyoming to discuss their views on the future of energy in the Rocky Mountain West and the U.S. as a whole. 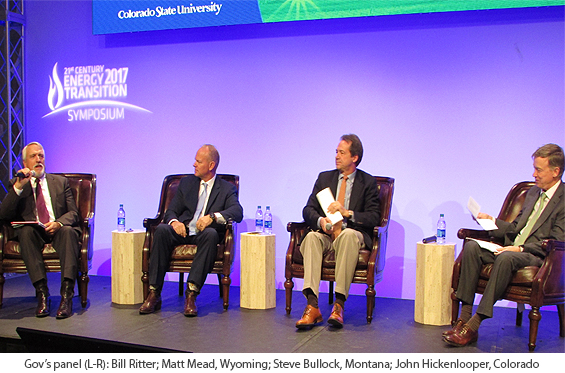 While acknowledging the region’s abundant and economically vital natural resources of coal, oil and natural gas, Republican Gov. Mead said the West is a place where a common concern for preserving the environment has taken precedence over narrow state self-interest.

“In the West, there are real political differences, but also real friendships,” he said. “I count these governors as good friends.

“There’s a lot more we have in common than what separates us.”

While Wyoming is the second-biggest producer of energy in the nation, Mead said the state’s other major industry – tourism – is just as important.

“Do we want energy or tourism? I think that’s a false choice,” he said. “There’s no future for a state if you don’t take care of the environment.”

Montana Gov. Bullock, a Democrat, said his state is also a big energy producer, with 28 percent of the nation’s coal reserves and a $100 million coal payroll.

But residents of his state recognize the need to protect the environment while producing coal, he noted.

“We Montanans are outdoor people,” he said. “We see the climate change and we know we have to address it.”

Bullock said the state has worked to come up with a plan to do just that. 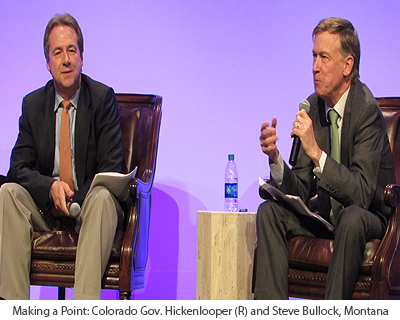 “We’ve put together an energy blueprint, with not just the challenges but also the opportunities we have for our communities, for the economy and for the environment.”

Democratic Gov. Hickenlooper said Colorado is taking a strong stand to reduce carbon dioxide emissions and plans to decrease those emissions to the same level as set forth in the Paris climate accord, even though President Trump declared his intent to have the U.S. withdraw from that agreement by 2020.

“It’s not a question that’s partisan but bipartisan,” said Hickenlooper. “We want a system that’s as reliable and as affordable as we have now and the cleanest possible energy we can.”

Hickenlooper said the sharp drop in cost in wind and solar power over the last decade, along with declining natural gas prices, have paved the way for the transition to a new energy economy.

“That’s what’s allowing us to look at this new future,” he said.

Working together has also been instrumental in meeting the challenges of energy production, Hickenlooper noted. He cited a move started by Wyoming and picked up by Colorado to demand oil-and-gas companies reveal what is in the fluids they inject into the ground while drilling.

Another area of collaboration has been in Western states joining together to support the creation of charging infrastructure for electric vehicles – a key component for their ongoing adoption by the public.

“It’s the chicken-and-the-egg thing,” said Mead. “You can’t have the cars if you don’t have the infrastructure."

“Those are the kinds of challenges that the states can resolve by working together,” said Hickenlooper.

One of the big ongoing challenges facing energy-exporting states like Montana, Wyoming and Colorado is in building electrical transmission lines across private and public lands.

Hickenlooper said when lines cross those lands, it’s important to be able to find compromise solutions.

“We need to have more transmission, and that’s going to cross somebody’s land or federal land,” he said.

“There’s no real alternative but to sit down with the interested parties and talk through the conflicts.”

Mead said that’s another situation that involves states working together to find solutions.

“It does us no good to get transmission lines to our borders,” he said. “We have to work with other states to get (power) where it needs to go.”

Former Colorado Gov. Bill Ritter, who moderated the governors panel, said one example of states working together was in the de-listing of the sage grouse from the federal Endangered Species Act list, which then allowed energy production where it had previously been prohibited.

Ritter said the effort was able to persuade the U.S. Fish and Wildlife Service that the bird was not endangered. While taking the sage grouse off the Endangered Species Act list, the 2010 action maintained the bird's protection by calling for regular reviews of its numbers and habitat.

“We probably assembled the broadest coalition in the history of the West -- industry, farmers, ranchers, environmentalists.

“We got that done, and we built collaborative muscle that didn’t exist before. We got to the point where we really moved the ball.”

Ritter said he is worried that the Trump administration's ongoing EPA regulation rollbacks might derail regional progress that’s been accomplished.

“We’re concerned the administration is going to take away all the guardrails that allowed this kind of cooperation to exist.”

That concern was echoed by Republican Mead.

“If we go down a different road now, it says don’t have a collaborative process because it rests on a whim,” he said.

Mead also noted that the Trump administration’s climate change denial should not impact the West’s solutions to climate challenges -- particularly when it comes to burning coal.

“We shouldn’t be afraid of where science takes us,” he said.

“I understand the challenges of coal, but there are solutions out there. We know we can capture carbon dioxide off a coal-fired plant, but the question is how do we utilize it?”

Mead said the solutions to the West’s environmental challenges ought to come from innovation provided by the states.

“Certainly, we can’t leave our fate to whoever’s in the White House -- Democrat or Republican. It should be addressed by the states.”

“I think collaborating Western states can do a lot together and be leaders in this, and we ought to embrace it,” he said.

Ritter, who now serves as director of the CSU Center for the New Energy Economy that organized the symposium, said holding annual symposiums on the future of energy is a fitting and important role for academic institutions.

“This is an academic setting, an outstanding place to facilitate discussions on problems that societies across the world face,” he said.

“Some of our biggest problems have to do with how we produce energy and how that impacts climate change.”