FRISCO -- It’s been a whirlwind inaugural year for ELEVATE  coSPACE, the first co-working community in the heart of Summit County ski country.

Co-founder Amy Kemp wouldn’t have it any other way.

“It’s been unbelievable,” said Kemp, a former marketing specialist for Vail Resorts who launched ELEVATE with a small group of partners in October 2014. “We’ve truly been trying to build ELEVATE as a hub. It’s just been very cool — it’s been incredible, really — to watch companies come in and launch, see them become part of the community.”

Found just minutes from the chairlifts at Copper Mountain, Breckenridge Resort and Keystone Resort, ELEVATE is a natural extension of the immensely successful co-working movement in major metros like New York City and San Francisco. It takes the elements that make urban spaces so appealing — affordable desk space, entrepreneurial workshops, boundless energy and, of course, wicked-fast Internet — and tailors them to the unorthodox melting pot of a Rocky Mountain resort community.

For Kemp and her fellow founders, that means honing in on the tourism and outdoor recreation industries. Together, she believes those two are the lifeblood of Summit County, drawing hundreds of new residents every year for seasonal resort work and more permanent gigs.

“We have so many remote workers moving to Summit County and we want to support them, give them a place to go, but we also want to become a launching pad for these businesses that are either brand-new or really getting on their feet as existing businesses,” Kemp said. “Even if they aren’t a tech business, I think they can learn from what tech businesses are doing.”

In its first year, Kemp says seven ELEVATE startups have gone from seedlings to living, breathing companies, thanks in large part to the community hub she and her partners are building.

The space now boasts 30 full-time members, all of whom rent desks or private office space like their city-bound counterparts. It’s been so successful that Kemp recently partnered with HUB Breckenridge, a boutique tech repair shop, to launch an ELEVATE satellite office on Main Street in Breckenridge.

The small space will fit about five desks — much smaller than the two-story flagship building in Frisco — but it fits into the co-founder’s philosophy of community growth and engagement.

“From the outset, we wanted to be that hub for the community, a community gathering space,” Kemp said. “At the same time we wanted to focus on who we’re here for and the needs of the community, and that’s really the tourism industry. We want to capitalize on that, even as Summit County as a whole is expanding.”

One fast-moving ELEVATE startup, the outdoor excursion app Adrenaline Escapes, was the brainchild of a Summit County local, Shawna Henderson. Like Kemp, her background is in the tourism and outdoor industries, but she saw a glaring hole in matchmaking services for high-octane adventurers — say, folks who want to go on an overnight ski trip, not simply lap the same chairlift over and over.

These adrenaline junkies are drawn to exciting and potentially risky excursions, Henderson said, but they often don’t know how to find the right outfitters to get the most bang for their buck.

This idea blossomed at the second-annual Summit Startup Weekend, hosted by Elevate and it’s co-working neighbor across the street, six-month-old Evo 3 Workspace. Henderson and Adrenaline Escapes won the pitch competition, and now, shortly after ELEVATE’s one-year anniversary, the app is going through a final round of tweaks thanks to a new partnership with Regis University. 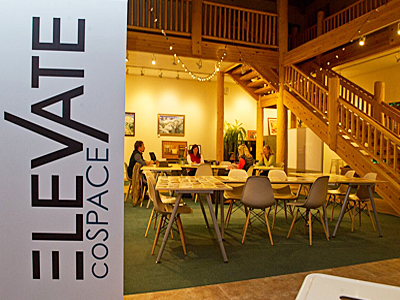 Kemp refers to ELEVATE’s partnership with Regis as an “IT guiding service.” In exchange for credit, Regis students provide feedback and suggestions on the tech blueprint of an app like Adrenaline Escapes.

“For existing business or start-ups that don’t have the infrastructure this will have tremendous value,” Kemp said. “We’re just working on getting everything in order right now.”

Along with promising new businesses, ELEVATE has played a major role in bringing tech workshops and entrepreneurial all-stars to the mountains. The space hosted 109 separate events since opening day, Kemp said, from national events like Summit Startup Weekend (it returns Nov. 13-15) to thoroughly Colorado ones like the Start-up Ski Summit.

Again, Kemp leveraged her know-how as a ski industry veteran to create a program people just couldn’t skip. The inaugural ski summit was held in late March and drew about 70 participants for a morning of skiing, followed by an afternoon of keynote addresses with ski industry heavyweights.

This season’s summit is scheduled for Feb. 5.

The superstar of the first event was Joel Gratz, founder of the wildly popular snow forecasting app and website Open Snow. He talked about tricks of the trade — powder hounds swear by his — and also discussed how to grow a small labor of love into a thriving business.

Like Gratz, Kemp believes that dozens of transplants to the High Country have the drive and know-how to launch a startup around their passions.

“So many people who come here are already risk-takers, people who aren’t following a traditional route anyway,” said Kemp, who mentions that she’s had friends who moved from Summit County because they had to find a “real job” finally.

“It’s in their DNA. They come up here thinking they’ll only be here for a season and then they stick around for years. Skiers and mountain bikers and everyone else are already comfortable with the idea of risk, and so it’s only a matter of having a community that can guide them through pursuing business or other entrepreneurial avenues.”

Kemp should know: ELEVATE is her entrepreneurial experiment. After leaving Vail Resorts, she launched Mountaintop Media, an independent marketing company, and soon paired it with the ELEVATE mission.

“For me, personally, ELEVATE is on the track I’ve been on for many, many years,” Kemp said. “It’s an incredible marriage of my background and my history in the ski industry space with this new, exciting entrepreneurial community. I’m just so proud to be part of this and see what’s happening with our local businesses.”