DENVER -- MassRoots, a social network platform for cannabis users, has secured the first initial public offering for any company with ties to the marijuana industry. 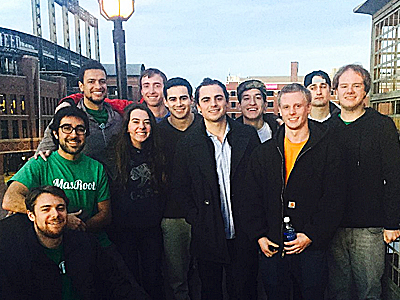 Based in Denver, the two-year-old startup earned the IPO on April 9. It’s now valued at $45 million, with stock traded publicly through the OTC Markets Group marketplace at 10 cents per share.

“Our whole thing is community, and opening the cannabis movement to the public marketplace is a huge step forward,” said Stewart Fortier, chief technology officer and co-founder at MassRoots.

“We see a public offering as crowdfunding in the highest form — only accredited investors can get involved with these companies and that gives you the viability you need to keep growing.”

MassRoots, a photo-heavy platform like Facebook and Instagram, was built to be familiar. As a lean startup, Fortier wanted to tap into the elegance of popular platforms, yet tweak his product just enough so that cannabis users felt comfortable posting photos of marijuana use — no matter their state of mind.

“If we wanted our users to get engaged right off the bat, it had to be friendly and familiar,” Fortier said. “The feel is very similar to Instagram, just customized with the green tones — the things you’d expect from a cannabis app. But when I was designing it, I wanted anyone to pick it up, especially a stoned person, and know how to use it right away.”

MassRoots is based in Denver but the four co-founders lived in Virginia before moving to Colorado in 2013 for the state’s thriving tech scene and their target audience.

“When we got out here, we saw way more opportunities than we had before,” Fortier said. “Even if we were in California we would feel more restricted. I think Colorado has the best market, the best legal cannabis market, and after coming from the East Coast, we realized the market is more mature than we realized.” 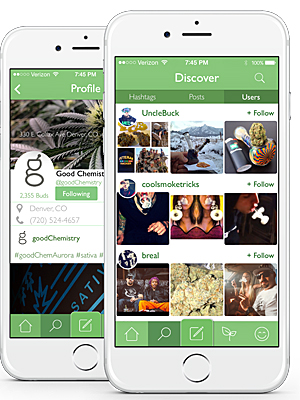 Although photo-sharing platforms are far from new, MassRoots Chief Executive Officer Isaac Dietrich came up with the idea while sharing a joint with a friend in their dorm room. As Fortier explains, they knew plenty of cannabis users who wanted to connect with like-minded techies, but they didn’t want to post photos of marijuana where grandma and grandpa might see.

The first version of the app took Fortier about a month to build. He was sole developer at the time, working between classes at the University of Virginia to build an app that Dietrich could then sell to investors. Users quickly adopted the app, giving the fledgling company the validation any startup needs.

“We didn’t even go out to raise money until we had a product with users already on it,” Fortier said. “So many people raise money, then find out no one wants to use what they built. We wanted people to really buy into the ‘social network for cannabis’ concept before launching, especially in the cannabis space where investors already have cold feet.”

Banned from the App Store

The road to the MassRoots IPO was bumpier than it is for most, even after the app notched 75 million posts from a consistently growing user base.

The IPO came six months after the company’s iPhone app was banned from the Apple App Store in November 2014. At the time, MassRoots had already been available through the store since September 2013. It boasted 215,000 users in all 23 states with legal medical or retail marijuana, along with nearly $625,000 in total equity investment capital.

“We thought that was the death knell of the company,” Fortier said of the App Store ban. “If you’re a mobile app, you have to be on the iPhone. When Apple tells a company they can’t do something, they usually comply. But we couldn’t.”

For Apple, the biggest concern with cannabis-friendly apps like MassRoots is the same concern marijuana dispensaries have about the banking industry: marijuana is legal in Colorado, but it’s still classified as a Schedule I drug by the federal government.

Apple removed the app from its store with little warning, citing an App Store legal guideline that prevents apps from skirting laws where users are based.

“That’s a prime example of trying to tap into the cannabis industry, where the old guard isn’t familiar with what you’re trying to do,” Fortier said. “It’s a difficulty I think anyone in this industry in this state will face.”

After the app was pulled, Fortier and the development team double-checked laws in the 23 legal markets and beefed up the app’s geo-fence feature, which prevents users in the remaining 27 states from downloading it.

Apple wasn’t appeased until nearly 10,000 MassRoots users emailed the tech giant to get their app back.

By late January, Apple revised its rules and gave the app a green light, again opening the App Store to other cannabis-friendly platforms like Denver-based HighThere, a dating app like Tinder, and new features on Weedmaps, one of the first dispensary and strain locators to hit the market.

The App Store victory bolstered MassRoots’ profile for an IPO, Fortier believes, and with 275,000 current users and roughly 20 full-time employees, the app continues to grow.

The company is currently beta-testing a business portal with four Colorado-based cannabis brands, including dispensaries.

“It’s a green light for other cannabis companies to do the same thing,” Fortier said of the IPO. “We went through the entire vetting process through the SEC...so it’s cool to see where things are headed. The scale has really tipped for us at this point, taking us from startup mode to company mode.”