BOULDER -- A team from the University of Colorado Boulder is taking a page from "The Magic School Bus" and journeying inside the body. 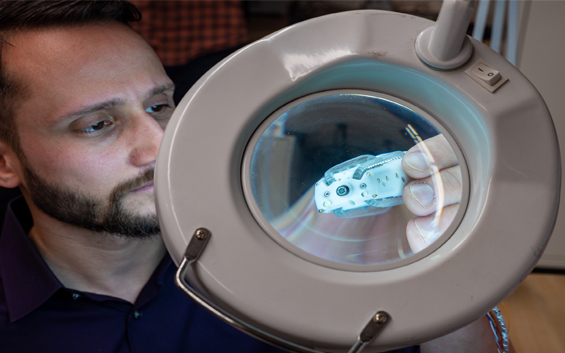 The researchers, led by engineer Mark Rentschler, aren’t traveling by shrinking bus like the one in the cartoon and book series. Instead, they’re using a robot that can navigate the squishy and often-unpredictable terrain of the intestine.

Rentschler and his colleagues have already built several prototypes of their gastro-intestinal explorer, although they’re still a long way from testing it in people.

Called “Endoculus,” this machine is about the size of a C battery and moves on four motorized treads. It’s designed to crawl through a mammalian colon, seeking out and even taking biopsies of intestinal polyps and other signs of illness.

The group hopes that the robot will one day change how millions of people across the United States get colonoscopies, making these common procedures easier for patients and more efficient for doctors.

First, the team must learn how to master an environment that, in many ways, is harder for a robot to navigate than an alien planet.

“You have to forget about everything you know from a locomotion standpoint because driving around inside the body is very different than driving around in a car,” said Rentschler, an associate professor in the Department of Mechanical Engineering.

“The environment is highly deformable. It’s very slick. There are sharp peaks that you have to go over.”

He and his colleagues have reported some of their recent results at the Institute of Electrical and Electronics Engineers (IEEE) International Conference on Intelligent Robots and Systems in 2018 and in the journal IEEE Robotics and Automation Letters.

It’s also serious business: Every year, tens of thousands of Americans die from colorectal cancer. Regular colonoscopies for people age 45 and older are widely considered to be the best way to catch such cancers early.

Endoculus packs a lot of punch for conducting these procedures. The treads of this machine, which looks a bit like a mouse, for example, have been specially-designed to gain traction on slippery digestive tissue.

The robot is also a fully-packed medical device complete with a camera, an air pump for inflating the colon, a water pump for cleaning and a tool port for holding biopsy snares. And, Formosa estimates, it could be built even smaller using custom parts.

So far, the researchers have tested the robot using artificial colons and on anesthetized animals.

Rentschler and his colleagues are also imagining ways to take the human element out of Endoculus. The team is working to design a robot that can drive through the intestine, find worrisome polyps and biopsy them—all without a doctor at the steering wheel.

Rentschler’s team recently landed a $900,000 grant from the U.S. National Science Foundation to continue its work in automating colonoscopies -- part of the engineer’s self-described mission of creating “the operating room of the future.”

He is also quick to point out that his aim with Endoculus isn’t to get rid of physicians entirely. “But it is going to get rid of a lot of routine stuff, so that they can focus on the root causes of disease and, ultimately, treatment,” he said.

It’s a magic bus ride Rentschler is ready to take.