BOULDER -- A new field instrument developed by a collaborative team of CU Boulder researchers can detect and quantify methane leaks as tiny as  one-quarter  of a human exhalation from nearly a mile away.

The revamped and “ruggedized” laser technology -- based on Nobel Prize-winning science developed at CU Boulder -- turns a complex, room-sized collection of instruments into a sleek, 19-inch portable unit to tote into the field near oil-and-gas operations. 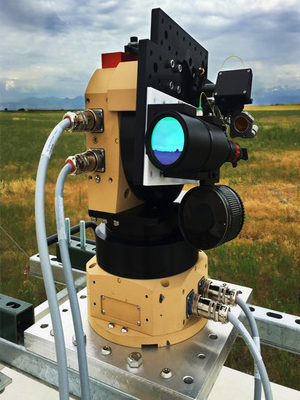 The team is comprised of scientists from CU Boulder's College of Engineering and Applied Science, the Cooperative Institute for Research in Environmental Sciences (CIRES), the National Oceanic and Atmospheric Administration (NOAA) and the National Institute of Standards and Technology (NIST).

The project, funded by an ARPA-E grant focusing on “high risk/high reward” science, published research results this week in the journal Optica along with a companion paper on the leak-finding routines in the journal Atmospheric Measurement Techniques.

Detecting methane and other gas leaks from oil-and-gas operations has traditionally been hampered by high costs and technological constraints, which have limited efforts to provide continuous monitoring.

The new technology, which relies on a laser system called a dual frequency comb spectrometer, provides a much-needed solution: extremely efficient, accurate data collection at a fraction of the cost of previous technologies.

“This instrument is particularly special because it’s precise, autonomous and continuous,” said Caroline Alden, a CIRES researcher and a co-lead author of the study.

“Other technologies like aircraft flybys or physically traveling to sampling sites pose a problem -- if a leak occurs between sampling events, you missed it.”

Continuous monitoring could help industry operators catch not only frequent, small leaks, but large, infrequent ones, Alden said. Such "super emitters" are thought to comprise only 20 percent of leaks, but cause 80 percent of emissions.

The journey to this technology started in 2005 when JILA researchers won the Nobel Prize in Physics for work on a device called a Frequency Comb Laser.

The laser emits hundreds of thousands of wavelengths of light, compared with the single wavelength of many traditional lasers. This laser enables the measurement of light with extreme accuracy, enabling precision atomic clocks and future mapping technologies, for example.

Other researchers realized that a frequency comb could also be used to measure concentrations of specific molecules in the air, as each would have their own light absorption “fingerprint.”

NIST researchers Nate Newbury and Ian Coddington made this possible by creating a frequency comb spectrometer capable of untangling the thousands of different wavelengths from the device.

The team scaled down what was originally a room brimming with instrumentation to a 19-inch box that could be carried into the field. Alden and others on the atmospheric team figured out how to use wind patterns to investigate possible leak points, enabling their frequency-comb based observing system to pinpoint the source of a methane leak.

“It was a great collaborative effort, it all came together perfectly,” said Rieker. “We ended up creating an instrument that was mobile, portable, and robust -- it works better than the original, at a tenth of the cost.”

The instrument sits on a mobile platform that can be placed out in field sites surrounded by oil-and-gas operations. It swivels 360 degrees, sending out carefully-tuned, invisible beams of light to reflect off small mirrors placed a mile or more away.

If the beam, composed of over 100,000 wavelengths, passes through part of a gas plume blowing like a ribbon through the air, gases in the plume absorb some of the light in the beam before it returns to the detector.

This lets researchers identify the unique absorption “fingerprints” of gases like methane and carbon dioxide. And with atmospheric models, researchers can track back to an actual leak location.

The team is now putting the instrument through a rigorous blind test: collaborators at the METEC test site, run by the Energy Institute at Colorado State University, set up a treasure hunt of leaks in varying locations and sizes, even planting false leaks to trick the system.

“We know nothing about the leaks or where they are -- so there will be no ‘cheating the system’,” said Rieker.

“We’re still preparing those results for public release, but I can say that we surprised even ourselves with our ability to find the leaks.”

This first-of-its-kind technology presents something very unique in the oil-and-gas industry: the ability to monitor hundreds of sites from a single location.

"The more locations you can measure with a single instrument, the more cost-effective it becomes," said Alden.

“As part of an effort to provide a service that can give oil-and-gas operators more efficient and cheaper leak detection, we are launching a startup called Longpath Technologies,” said Alden.

“We will continue to grow this alongside the emerging technology it relies on.”