BOULDER -- Boulder may have found a winning formula for attracting passionate entrepreneurs and innovators, but the city – particularly its charmingly funky downtown -- also has its own set of challenges. 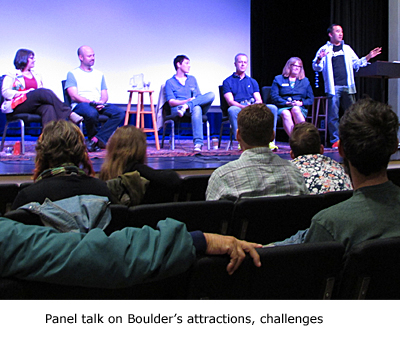 While the city is known for having more startups-per-capita than any other place in Colorado due to its gorgeous Flatirons backdrop and penchant for a laid-back, progressive lifestyle, the mostly young entrepreneurs drawn to its downtown vibe also deal constantly with tight housing and commercial space issues, along with parking and traffic irritations unavoidable in a bustling city core.

Boulder Startup Week’s second day on Tuesday opened with a panel discussion of what it is about the city that makes it such a huge draw for tech startups, particularly software companies.

“The draw is really the community,” said Jud Valeski, co-founder of Boulder-based Gnip, a social media data collection company founded in 2008 and sold to Twitter in April of last year.

“You want to gestate among others like yourself, to meet other like-minded folks to bounce ideas off of.”

“We have one of the highest concentrations of bars and restaurants and coffee shops in America,” said Maher. “It’s an amazing amount of amenities. To walk into a coffee shop literally packed with other entrepreneurs is pretty amazing.”

Mahoney noted Boulder’s “sense of community” as one of the reasons for its success in recruiting new tech startup businesses.

“It’s that sense of community – there’s so much collaboration that it creates a lifestyle that so many are attracted to,” she said. “It’s a sense of place that people can relate to, and it’s been very deliberate.” 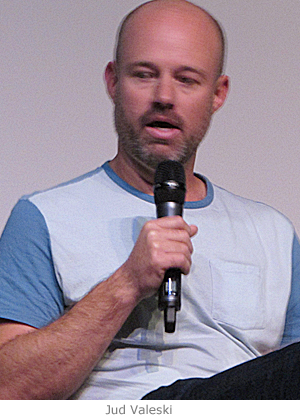 While panelists mostly sang the city’s praises and noted its advantages, they also acknowledged the drawbacks of Boulder’s slow-growth development policies and the lack of available, affordable residential and office space in the coveted downtown area.

Espinoza noted the city’s commitment to a defined buffer around it and a policy that does not allow downtown buildings to be taller than 55 feet have kept downtown Boulder a special, little-changing place.

But that’s made it tough on new business people wanting to live near and work in the downtown.

Espinoza said if young entrepreneurs want to make changes in city policies, they need to attend city council and planning commission meetings to have their voices heard.

“We care about what the business environment is like in Boulder,” she said. “It really is our town, and when we all participate we get the kind of town we want.”

That advice was echoed by Maher. “We do need more of the startup people to stand up if we want to keep Boulder unique and dynamic,” he said.

Valeski said the city might need to re-examine some of its growth policies. “We’ve constrained growth. On the one hand, it’s great, but on the other it’s a challenge.”

And while simply choosing to locate a business or home east of the downtown is one possible solution to the ever-rising cost of living and working near downtown, Valeski said in the four times Gnip relocated as it scaled, he never considered leaving downtown.

“If you move outside the city core, you start losing those (amenity) benefits,” he said.

Maher said downtown Boulder suffered during the Great Recession a few years ago and – while there is now some construction happening – it may be a brief boom.

“There’s growth happening right now, but there’s nothing else in the pipeline,” he said.

The week will include more than 120 events – panels, speakers, presentations, workshops and social gatherings – and Tuesday’s events included a panel discussion of how to get a brand right from the start.

A panel of media experts from Greenhouse Partners told a packed audience in the Boomtown Accelerator that getting the right brand can be even more important than the right product.

“We believe companies can be great starting with a brand rather than the other way around,” said Pete Burridge, company co-founder.

Amber Hickory said new companies need to always be aware of how their brand is being perceived by the public. 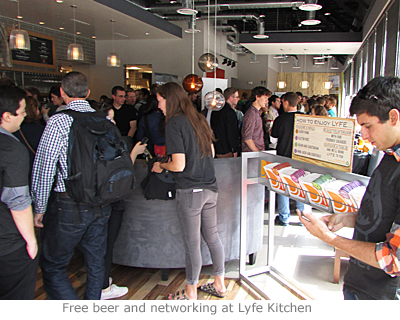 “Every single touchpoint matters,” she said. “Every customer experience is your brand.”

While Greenhouse Partners offers a media consulting service that many shoestring startups likely can’t afford in their early days, Burridge said that shouldn’t be an insurmountable obstacle.

“”You can do market research with almost no money,” he said, noting that conversations with those who could benefit from a startup’s product are free and easy to do.

And if a startup had some money to spend on branding, what would it take?

Tuesday’s BSW activities also included panel discussions of growth opportunities for food startups and Internet of Things manufacturing, a Startup Job Fair and a lively and packed networking gathering at Lyfe Kitchen, where the beer and T-shirts were free.

For a complete list of BSW activities for the rest of the week, visit here.

About the Author: Steve Porter