LOVELAND -- Avid Product Development has doubled its capacity to produce high-quality 3D-printed parts with the purchase and installation of a second HP Multi-Jet Fusion 4210 printer. 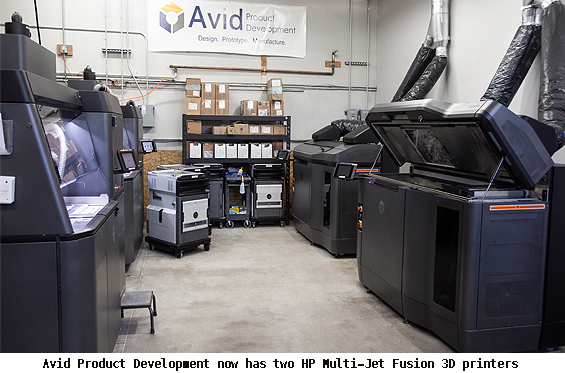 Avid, with offices in Loveland and Palo Alto, purchased its first HP 3D printer in 2017 and added a second printer this year.

Avid’s purchase of the first HP printer made it the first design, engineering and prototyping company in Colorado to have such a blazing-fast machine, which can print parts faster and more affordably than any other.

While Avid offers engineering and prototyping services, the HP printers are all about production.

“We’re all about production printing vs. prototypes,” Collins said. “We’ll still do prototypes -- we don’t shy away from that.

And there’s no production job too big or too small for Avid’s printers.

“It’s really good for finished products that would be injection molded from 10 to 10,000,” said Collins. “The reason we can do that is there’s no mold.”

And that makes it a whole lot cheaper for Avid’s customers, Collins noted.

“There’s never that tooling cost,” he said. “You can make design revisions as often as you like.”

One of Avid’s largest customer sectors is now the renewable energy industry.

“They get their molds started and we do bridge tooling for when their mold is not ready yet.

Collins said bridge tooling with the dual HP 3D printers is a great benefit for customers.

“Bridge tooling and low-volume finished products are the sweet spot of these printers,” he said.

“We now ship parts to both coasts and everywhere in between,” Collins said.

“It’s definitely nationwide for us now.”

Avid’s headquarters are located at 129 S. Cleveland in Loveland. The company has been adding new workers and now employs 11 people working two shifts.