BOULDER -- For Matanya Horowitz, founder of Boulder-based  Amp Robotics,  there’s a difference between building a robot and building an intelligent robot.

Since January, Horowitz and Amp Robotics have been designing software for material recovery facilities (aka, recycling centers). The robotic technology to grab, sort and move recyclables of every shape and size has been around for at least a decade, the founder says.

The only thing missing: A brain to go with the brawn.

“Our perspective on the problem is that the technology has been around for at least 10 years, maybe for as long as 15 years,” says Horowitz, a Boulder native who returned home after receiving a PhD in robotics from Cal Tech.

It’s a relatively simple problem — at least on the surface. Horowitz launched Amp Robotics in January with three employees and admits the company is still in the “very small, early stages right now.”

Yet his team has already built two recycling robot prototypes, one that’s made to replace the current generation of wildly expensive machines, and another that can be easily installed onto existing conveyors at present-day facilities.

Like many startups, Horowitz’s key to sustainability and eventual growth is cheap equipment and manufacturing. The retrofit robot is roughly the size of a person and comes equipped with only a handful of consumer-grade sensors. In fact, they’re the type already used in the Xbox Kinect, an optical video game sensor that runs about $150.

“We’re using off-the-shelf components — the robots, the sensors — and we’re simply adding our software to it. We’re a developer in that sense,” says Horowitz, whose business partner, James Bailey, left a programming job at Google to help launch Amp Robotics. 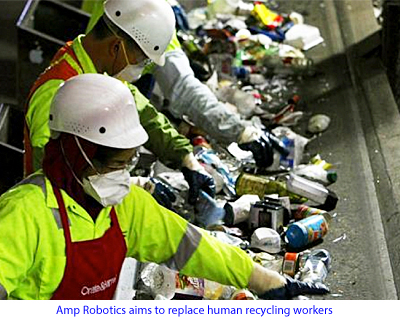 “Unlike a lot of equipment manufacturers, we use a learning system to show the robot what these different things look like.”

How smart is the bot? In several tests, the software could tell the difference between opaque and shiny plastic. It could also pick up on symbols, like the Pepsi and Coca-Cola logos.

Other recycling machines, like the massive, sci-fi-looking system from Zen Robotics of Finland, do the same work with “very exotic and expensive sensors,” Horowitz says.

The Amp Robotics tech was impressive enough to win a pitch contest at the 2015 Resource Recycling Conference, held in Indianapolis in late September. The judges were experts in the recycling and reclamation industry, Horowitz said, and they saw a need for the product — particularly one that is affordable from the start.

At this early stage, Horowitz doesn’t have a concrete retail price for either of the two robots. However, early estimates show that his system could have a payback time of less than one year each and a return on investment time of about five years.

“The reason we won is because there really is a need for this kind of system in the industry,” Horowitz says. “We’ve seen a lot of the centers -- the material recovery centers -- where the managers are eager to try this out. If the system works as well as we claim it does, they will be eager customers.”

Again, an intelligent, man-sized robot made for a trash conveyor sounds relatively simple, but Amp Robotics would hardly survive if the technology already existed.

Between his undergrad and graduate programs at Cal Tech, Horowitz set his sights on the recycling conundrum. He fast became an expert on the many roadblocks, both technological and institutional, that have prevented the recycling industry from truly taking off.

Along with other sources, Horowitz points to a recent opinion piece  in the New York Times about the outrageous cost of recycling.

For years, stateside recycling facilities have made a profit by selling reclaimed materials on the global commodities market. But in the past five years, the Chinese economy has started to slip, taking with it a major outlet for recycled American materials. When Chinese demand dried up, many centers either closed or severely cut their operations.

Horowitz hopes to close the gaps with his company’s robots.

“The manufacturing aspect of being at a recycling center can be awful,” Horowitz said. “They have huge turnover issues — the work is hard, the conditions aren’t always the best, they run under capacity because they just can’t man the lines. With us, they can fill in the gaps to make up for the manual labor.”

Interest is already piqued after less than a year. In the next few weeks, Horowitz expects to announce the company’s first-ever pilot project with a Colorado-based recycling center.

“It seemed like Colorado was a great place to get started, especially in Boulder,” Horowitz says of the company's origins. “Our systems — the robotic systems that help with recycling — are a great fit for Boulder. It just fits into the ecosystem here.”

To see a video of the kind of robots Amp is developing for the recycling industry, click here.