DENVER -- Think of  Altitude Digital  as a big fish in an even bigger pond.

For just under seven years, the downtown Denver startup has slowly been building a network of clients in the realm of online video advertising.

It’s the 21st-century version of television advertising, with whales like Google and AOL dominating the market.

The whales pair advertisers like Audi and Old Navy with websites overseen by services like Facebook, Vimeo and Microsoft. They host sites for video producers like CNN and Hulu, which then serve up the ads before or after video clips they produce.

Right behind the whales is Altitude Digital, the brainchild of former music promoter Jeremy Ostermiller. The Colorado native left the music world in 2009 — “Music is hard to make money,” he said — and launched Altitude with a measly $500 for a website.

“[It was] probably one of the worst websites you’ve ever seen,” Ostermiller recalled. “‘It was a very slow, organic build. I couldn’t hire someone until I had enough money. I relied on client interest to fuel inside sales and it’s now grown into a big business.”

In six years, from 2009 to 20015, the company has grown by 100 percent compounded to see roughly $200 million in total revenue. That’s enough to make Altitude the fifth-largest video advertising service on the web, according to online analytics firm ComScore, with a 23.5-percent reach among U.S. Internet users.

The big fish is outpaced only by the whales: Google and AOL, along with industry names BrightRoll Platform and LiveRail.

“The Internet is a big place,” Ostermiller said. “It’s a wild, wild West, and it’s constantly moving at 100 miles an hour. What we were building in 2011 is much different than what we’re building in 2016.”

And the world of video advertising is only moving faster — and getting bigger.

Altitude currently serves up 9 billion daily ad impressions across 250,000 websites with video, Ostermiller said. That doesn’t necessarily translate to 250,000 clients, at least not at the moment, but he expects the company to continue growing as the Internet continues to evolve.

“Early on, the Internet was more of a newspaper, and now it’s becoming more of a television,” Ostermiller said.

“Video is a compelling format for us. Think of video as the 800-pound gorilla for advertising: From an advertiser perspective, it’s a very powerful way to convey your message, as opposed to a static ad with no animation and no movement.

“We really believe video is the most powerful tool right now.”

Before leaving the music world, Ostermiller worked closely with the Denver Post and saw how the old-school advertising department wasn’t sure how to leverage online ads.

“It was considered, ‘Sell print, give digital away,’” Ostermiller said of the mentality. “We had a big brand there and 100 sales people, but no one was able to sell inventory online.

“It came from this underdeveloped market. There are thousands of websites out there that do a great job developing content, but they don’t know how to reach advertisers.”

Ostermiller saw an opportunity and ran with it.

He improved the sketchy $500 startup website over several years and describes the final product as an eBay model: Altitude auctions its 9 million impressions across 250,000 sites to the advertiser with the highest bid in a real-time setting.

The more websites a video exchange service has, the more leverage it has to attract advertisers, and Ostermiller knew early on that scaling would make or break his company.

“When you have scale — when you’re a business with 250,000 clients — you have power in numbers,” Ostermiller said. “Then we took that a couple steps further, where instead of people in the middle you now have technology.”

That’s right: Instead of living, breathing ad reps, Altitude relies on a custom platform, dubbed Arena, to oversee the real-time bidding process. Arena (named for a boxing arena) requires massive infrastructure, and so building an in-house network of servers has fueled the last few years of Altitude’s growth.

The company now employs 88 people in Colorado and more at offices in New York and San Francisco, close to the data center servers it now needs. 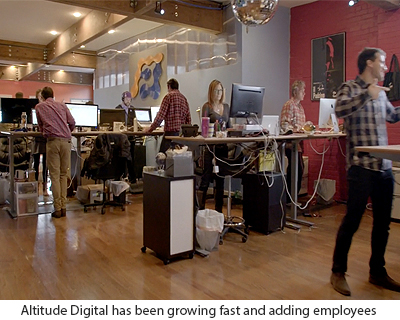 “I like to say that the only thing constant right now is change, and you have to build for the future,” Ostermiller said. “You have to think three years ahead, if not further.

“It’s a challenge for every company on the planet to know what’s next, and by the time you build your platform there’s something newer out there.”

That’s where being a small, independent company separate from the whales is a perk. His company is agile, Ostermiller said, and he’s now busy tracking the next evolution of online video advertising: crossing from web-only traffic to live-streaming TV.

Like traditional TV, most online video ads are currently served up at random. They’re not quite as targeted, or smart, as their text counterparts on sites like Facebook.

But Ostermiller feels another change coming, and Altitude is currently working on technology to pair with services like Apple TV.

“The dumbest screen in your house is also your most expensive screen -- and that’s the TV,” Ostermiller said. “Soon, that will be the most powerful TV in the house.

“On the advertising side, the Holy Grail is attribution across screen.”

The pond just got even bigger.