LOVELAND -- Aleph Objects, Inc.   announced it has 3D-printed the  one millionth part  used in the production of its award-winning  LulzBot® line of desktop 3D printers. 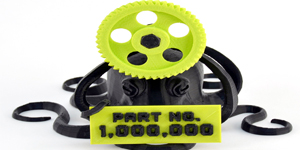 “LulzBot desktop 3D printers are workhorse machines that we, and our customers in over 85 countries around the world, rely on every day,” said Harris Kenny, Aleph Objects VP of marketing. “We are proud to see the growing number of universities, laboratories, facilities, and businesses investing in clusters of LulzBot 3D printers to scale up educating, training, prototyping, and manufacturing.”

Each LulzBot 3D printer contains more than 30 printed parts. The one millionth part, a large herringbone gear licensed under the GNU GPLv3, was printed by the company's Cluster of 140 LulzBot 3D printers that operates more than 100 hours per week and is essential to the company's production process. This method of production was originally pioneered in desktop 3D printing by the RepRap Project.

According to Aleph Objects, it took more than two and a half years to print the first 500,000 parts. Aleph Objects now prints at a rate of 500,000 parts per year. This increased efficiency was made possible by upgrading to new models of LulzBot 3D printers, adding more machines, expanding operating hours, and adopting new technology to make operating and monitoring the machines more efficient, the company said.

To celebrate, the company published a Cluster case study, detailing how the Cluster works. The one millionth part will remain on display at Aleph Objects headquarters, and can also be seen during the public company tour that takes place every Friday at 2 p.m. Mountain time (holidays excluded).

Anyone interested in printing their own version of this model can download the file in BLEND format and STL format. This accomplishment is the latest in the over five-year history of LulzBot desktop 3D printers. The full History of LulzBot Printers (HOLP) can be found online in PDF format.