FORT COLLINS -- Rural America is where most of the food we eat is grown, but it has not received the kind of attention it deserves to continue to innovate and remain the food basket for the world.

That was one of the messages from former U.S. Secretary of Agriculture Tom Vilsack, who gave the morning keynote at the CSU AgInnovation Summit on Wednesday. 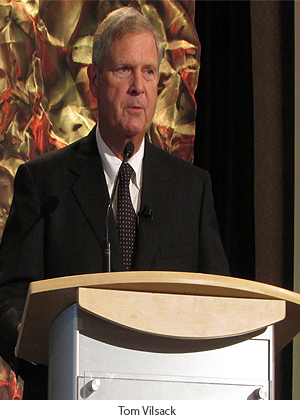 Vilsack, the first of several speakers to address the second CSU AgInnovation Summit that continues through Thursday, noted that in 1950 there were 25 million people living on farms in the U.S.

Today, he said, that’s shrunk to a little over 2 million working on just 250,000 food operations.

That shift from small family farms to large commercial operations -- powered by innovations in plant breeding, cultivation and harvesting -- has wreaked havoc on rural America and many of its small towns, Vilsack said.

As more and more people move away from rural America because of lack of opportunity, residents who remain are faced with closing schools, hospitals and businesses -- further worsening the prospects for area young people.

Vilsack said that vicious circle must be curtailed.

“What can we do to ensure they stay in these rural areas,” he asked. “I think we need a new economy with four pillars.”

Pillar number one, Vilsack said, is to support production agriculture outside of the giant commercial farm model.

“There are some people who don’t want to be a commercial operation,” he said. “You have to create alternative markets.”

The second pillar is to create local and regional food systems, in which locally produced food has dependable distribution partners.

The third pillar, according to Vilsack, is a stronger emphasis on conservation of the soil -- and especially of water -- in states like Colorado.

“Colorado needs to figure out how to save 1 million acre-feet of water over the next 10 years, and that means you have to invest in conservation.”

Vilsack said government must help do that by providing incentives to help farmers conserve.

“With farmers, there’s no way of shifting the cost of conservation,” he said.

The fourth pillar for a sustainable rural economy is to bring manufacturing back to those rural areas. Vilsack said manufacturing operations must necessarily be small-scale to fit local populations and focus on meeting local needs.

But to do all that, Vilsack said consensus is needed but finding consensus in an age of ultra-partisan politics is not an easy matter no matter how worthy the goal.

“I’m deeply concerned about our country and this division taking place today -- the inability to have dialog and consensus,” he said.

Vilsack said he believes any hope of doing that must begin with the younger generations, including walking college campuses today.

“I believe the college students of the country are the ones who can show us the way to re-discover community,” he said.

“Let me suggest that food and agriculture is the area that conservatives and progressives, Democrats and Republicans, can begin to do this.”

Vilsack said issues to rally around in a non-partisan way could include food access -- an estimated 23 million Americans don’t have access to a decent grocery store -- and food waste, which accounts for about a third of all food produced. 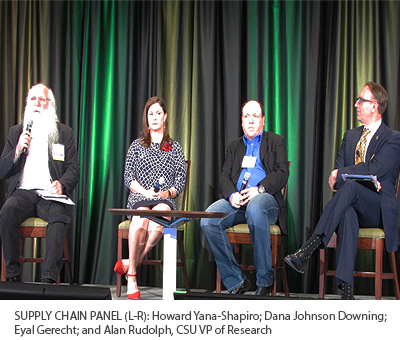 “My pitch today is for young people to get engaged about the importance of food,” Vilsack said. “We’ve got to bring back a sense of community to this country.”

Vilsack said it will be up to America's young people to help inject a sense of hope and optimism and overcome the partisan negativity seen in recent years.

“What we have to do is restore a sense that tomorrow is going to be better than it is today,” he said. “What we want to do is create a pathway for a better economy.”

“Innovation is about creating something new and responding in a creative way,” he said. “It is about fresh thinking that creates value.”

Menon said CSU intends to do its part in advancing innovation in agriculture by training the next generation of workforce demanded by the industry.

Menon said the university aims to “build Colorado as the hub of innovation in agriculture.”

“It is my hope that Colorado State will continue the commitment of feeding a growing (world) population against the constraints of a more dangerous world.”

Today’s sessions will include panel discussions on “Financing the Future of Ag Innovation in Colorado” and “The National Western Center: A Global Destination for Agricultural Heritage and Innovation” and a keynote from Chris Hjelm, executive VP and CIO for the Kroger Company.

Sponsors of this year’s summit include Colorado Livestock Association, ch2m and the City of Fort Collins.