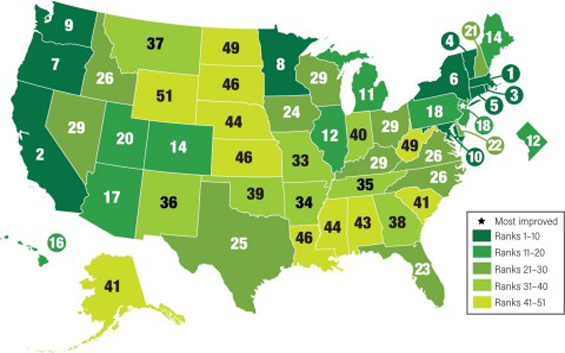 The 12th annual report from the American Council for an Energy-Efficient Economy (ACEEE) released today identifies the leaders (Massachusetts and California), the most-improved states, notably New Jersey, the states that lost ground such as Iowa, and those lagging behind, including North Dakota, West Virginia and Wyoming.

Colorado placed No. 14 on the state rankings, joining other states that have unveiled plans to boost investments in efficiency and clean energy.

In response to federal efforts to freeze U.S. vehicle and appliance standards, several states worked to retain their own standards and to promote electric vehicles as well as zero-energy buildings, the report notes.

The scorecard, which ranks states on 32 metrics in six areas, finds:

The American Council for an Energy-Efficient Economy is a nonpartisan, nonprofit research group that explores energy-saving policies, programs, technologies, investments and behaviors.

Navigant: Global annual market for energy IT and cybersecurity for software to reach $32B by 2028

The Innovation Game: Using the power of intrapreneurship to advance breakthroughs in large enterprises

Navigant: Smart pole deployments to have 50% compound growth thru '28